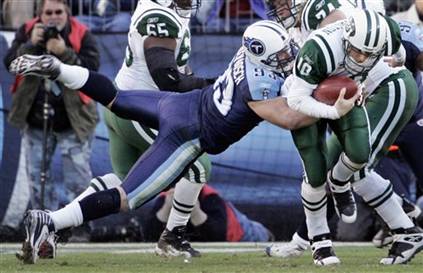 The Hawk is ready to fly this season, and says that there are no more excuses for him not to know enough to see the field.  I hope he can put it together, because having another legit threat in the mix is a must for a WR corps that better step-up this year.

Justin McCareins is planning to make his first free agent visits by the end of the week.  Lets hope someone bites so the possibility of a return isn't even available.

David Climer says Cutler would be worth the costs for the Titans. Good thing about 90% of the rest of the free world agrees.  Truly insightful stuff, Dave.

John Czarnecki has a report that confirms what a lot of Broncos fans are starting to believe: a huge chunk of the controversy around Cutler and McDaniels is being egged on by agent Bus Cook.  Of course, as a token cranky-old-white sports columnist, he's turned-off by these young whipper snappers not respecting their elders and trampling his lawn:

I don't know what to make of Cutler. He turned me off last season when he said his arm was better than John Elway's. He talks about McDaniels not being smart enough to simply pull him aside and talk to him one-on-one and sing sweet accolades into his ear.

For his next column, John is going to give those clouds the what for!

I want Texas Tech coach Mike Leach in the NFL so badly beacuse of money quotes like this one on QB Graham Harrell's draft status getting knocked because he played in the shotgun so much in college:

I only need a three-hour window. I'll have a great clinic for all the NFL coaches who are so horrible that they can't teach a guy to take a snap under center and go backwards.