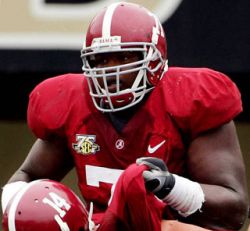 Most people think that the Niners will go QB with the 10th pick, but with Shaun Hill and Alex Smith already on board, they can ill afford to bring in another QB project and have a three-way crappy QB battle for the next couple of years.  Also, new coach Mike Singletary is looking to build a Titans-style team focused on running the ball and defense.  A pass rusher seems to be the biggest need, but with Brown gone, and Maybin being bit of a reach, the Niners will address their other big need at OT with Andre Smith.  Smith has been dropping down draft boards due to his off the field issues and less than stellar workouts, but his talent is undeniable. With Sergeant Singletary knocking some sense into him, and the luxury of playing RT at first, Smith should be able to contribute right away.

The Buffalo Bills are now on the clock..