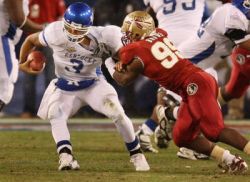 The Packers are swithing to a 3-4 Defense this year and are slightly understaffed to do it.  They are strong at the Inside Linebacker spots, but there are concerns on whether DE Aaron Kampman can play as an OLB.  The drafting of Brown will give them the best pass rusher in this draft and will help solidify their formation change as he has drawn comparisons to DeMarcus Ware of the Cowboys.  Another option for this spot would be to trade down with a team making a run at one of the franchise QBs, as both Matthew Stafford of Georgia and Mark Sanchez of USC are still available.  The trade would net them more picks and they could take a guy like Penn State's Aaron Maybin later in the round.  Either way, moving from a 4-3 to a 3-4 is very hard and often takes two to three years to make the switch completely.  Look for the Packers to spend much of this draft taking players that can play a 3-4 defense in the NFL.

The San Francisco 49ers are now on the clock..