Share All sharing options for: With the 8th Pick in the MCM Mock Draft.... 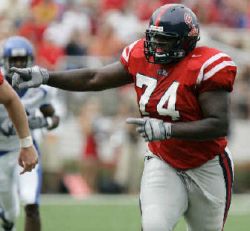 The Jaguars were one of the most disappointing teams in the 2009 season, and the main reason for their decline was a plethora of injuries and terrible play from their offensive line. I went back and forth between Oher and Andre Smith with this pick, but after the combination of Smith being kicked out of the Sugar Bowl for breaking a team rule and disappearing at the combine he will most likely slide down draft boards. Oher is a versatile lineman who will most likely but plugged in at left tackle in his first year or can kick down to guard, depending on where they decide to play Tra Thomas, who is really not a long term solution for them. The Jags other main need is at WR but with Crabtree and Maclin gone it made taking an OT a no brainer, as the Jags will want to get back to what they do best next year, pounding the ball with their run game.

The Green Bay Pakers are now on the clock..