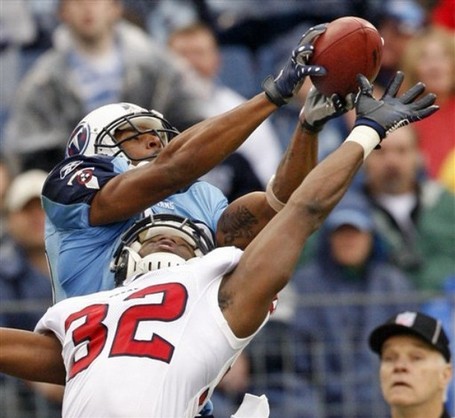 ESPN's Paul Kuharsky is in town today covering the beginning of the off-season program at Baptist Sports Park, and what kind of reporter would he be if he didn't ask around about the possibility of the Titans bringing in Torry Holt.  The National Football Post reported we almost got him in a trade before he was cut, and most observers expect the Titans to be one of the most interested teams when Torry gets back stateside.

So what do our leading QB and WR think?

I've never crossed paths with him over the years, but I've obviously been a big fan of his. He's a heck of a receiver, he's been one of if not the most productive receiver in the last seven or eight years and is a guy who with his ability to play the game could help us. Whether that works out, we certainly would like to have him, but if it doesn't I feel great about the guys we have here.

Torry Holt is a veteran receiver, very experienced, he's been around, he's been on Super Bowl teams, he knows what it takes to win, he's been playing at a high level for years. I think he'd be an addition that could do nothing but help our offense. ...Myself and Torry are two different types of receiver, but being the veteran that he is he could still teach me some of the things that help me out. He's a little bit smaller than me, but he's a quicker guy. He runs sharp, crisp routes, he gets in and out of his break. He stays low, and being a taller receiver that's something I need to work on, when you're a tall guy you usually have a tendency to stand up coming in and out of breaks. He's still playing at a high level, so I definitely think he's going to get into a good situation.

The duo were also asked about Cutler, but understandably didn't seem very interested in encouraging speculation.