Tennessee Titans Morning Links: Love The One You're With Edition

Share All sharing options for: Tennessee Titans Morning Links: Love The One You're With Edition 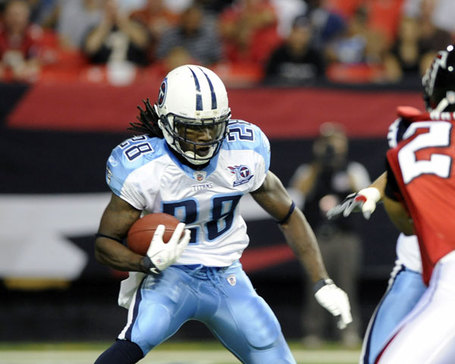 Vince Young was present at Baptist Sports Park on day one of the 'voluntary' off-season workouts, which started yesterday.  That's a big and necessary shift from last year when he missed many of the sessions going back to school.

JJ Cooper wonders if VY will be as tolerant of being the back-up this year as he was last year.  I think he will be, but then again I also think he'll be pressed into service to start at least a few games this year.  Those performances will define the rest of his days here in Nashville.

Cutler to the Titans?  Professionals say no, but amateurs say shut up and quit wizzin' in our Wheaties.  Go back to reporting on what kind of almonds Brett Favre prefers, why don't ya?  I don't think he'll end-up here either, but a brother can dream...

What the Denver Post lacks in experts (they do employ Woody Paige, after all) they make up for in guys who say things I like:

Tennessee Titans: This might be Cutler's first choice, because he spends a considerable portion of his offseason hanging with his Vanderbilt buddies in Nashville, home of the Titans. Also, Cutler's first pro offensive coordinator, Mike Heimerdinger, now holds the same position at Tennessee.

Weighing against a deal is the fact the Titans already have a 2006 first-round quarterback with issues, Vince Young.

The Packers matched our offer to CB Jarrett Bush, and after reading the Packers' fans reviews of him yesterday I have to say I'm pretty relieved.

Justin Miller re-signed with the Raiders, so the Titans search for depth in the secondary must look elsewhere... like perhaps the 30th pick in the NFL draft.

The Saints re-signed former Titans cast-off Courtney Roby to a new deal.  On a side-note, it's pretty hilarious to claim that one 'discovered' a guy who was drafted in the 3rd round by another NFL team that employed him for 2 years.

I tried to summarize this link, but I just kept throwing up a little in my mouth.  Click with caution.

The NFLPA elected attorney DeMaurice Smith as their new executive director, finally replacing the deceased Gene Upshaw.  This is not a good sign for labor peace though, as the openly combative Smith immediately began making statements like this: