Share All sharing options for: With the 6th Pick in the MCM Mock Draft.... 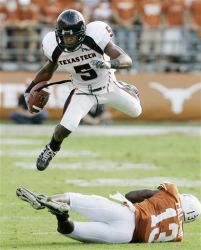 Housh is gone, and you never know which Ocho Cinco will show-up these days, so if Crabtree is here the Bengals have to jump all over it.  Unless their docs are completely convinced that this stress fracture in his foot is going to be a career-long injury they have to take the most dynamic skill position player in this draft.  Crabtree had the hands, body control and route running smarts to be a pro back in 2007, when he became the first freshman ever to win the  Biletnikoff Award.  He has enough size and speed to handle almost any DB, and the attention to detail to take care of the rest of them.
If Crabtree is there and the Bengals pass on him, there won't be enough Skyline Chili in all the city to console the poor fans of the Cincinnati Bengals.  I mean if your team is going to stink, at least make it exciting.
Also, I know they signed Coles, but he's a 1-2 year stopgap and IMO, you don't pass on a stud for a temporary fix.

The Oakland Raiders are now on the clock..