Share All sharing options for: With the 5th Pick.... 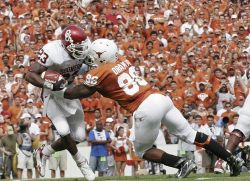 As I'm writing this the whole Donte Stollworth story bruhaha is just getting started, and that makes it all the harder to NOT take Michael Crabtree.  That, and the fact that the Browns offense in 2008 was like a hilarious joke.  But, the Browns still have Braylon Edwards and will be getting Joe Jurevicius back, so I can't see them taking a receiver here (even with Crabtree being the best left on the board).  So, forgoing offense, the Browns will choose to address their only other weakness from 2008, their defense.  In a perfect world for Cleveland, Aaron Curry would somehow slip through to them, but it looks like they'll be forced to settle for the next best defenseman, Brian Orakpo.  Orakpo offers them a huge, physical pass rusher who is the right size to slot into the OLB position in their 3-4 defense opposite Kamerion Wimbley.  He has the opportunity to become a cornerstone around which their defense is built in the long term and, in the short term, he should help the Browns eclipse their staggering sack total from 2008 (that'd be 17).  It seems forgotten that at the end of the 08 season, Orakpo won pretty much every major defensive award that he could, and he has the build to excel in the NFL.  Still, with all of the holes in the Cleveland lineup, this pick is wide open.

The Cincinnati Bengals are now on the clock..