Share All sharing options for: With the 2nd Pick.... 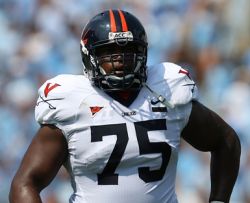 The events of the past 48 hours, plus the selection of Jason Smith as number one made this choice much tougher. I think the Rams covet Smith and they obviously need to replace Orlando Pace on the o-line. However, losing Tory Holt made me seriously consider picking Michael Crabree here. If this had been the days of Vermeil/Martz, then Crabtree would of definitely been the pick. However, these are Steve Spagnuolo's Rams now and he knows he has to protect his aging QB and open up holes for their stud RB. Monroe is a very good tackle and he will protect the QB's blind side for years to come.

Bonus Coverage (because I'm bored)....(draft music in the background...and highlights of Monroe showing)

Berman- "Wow, two o-linemen going one two, when was the last time we saw that"
Kiper- "This is a safe pick for the Rams. They have to replace Orlando Pace, and they do not want to make a risky pick and take a QB"

Keyshawn- "I thought they would take Crabtree, they have to get a playmaker. Who cares if the QB is on his back. Crabtree will catch anything thrown out there. Throw him the damn ball!"

Kiper- "I'm hearing that the Rams almost traded this pick for Vince Young, LenDale White, a couple of late draft picks and the exclusive rights to the name PacMan. The Titans GM, Mike Reinfeldt was confused by the offer and turned it down"

Berman- "Wow, I gotta believe the rights to the name Pacman was the deciding factor, I think Pacman Collins, Pacman Johnson and of course, the newly signed Pacman Holt would have a problem with that"

For more let's go to Ed Werder in Dallas...Werder- "Yeah, I heard rumors about that, but who cares. Let's talk about Cowboys. I spoke with Jerry Jones while I was putting butter on his bread....

The Kansas City Chiefs are now on the clock..