The Case for the Tennessee Titans Adding Torry Holt

Share All sharing options for: The Case for the Tennessee Titans Adding Torry Holt 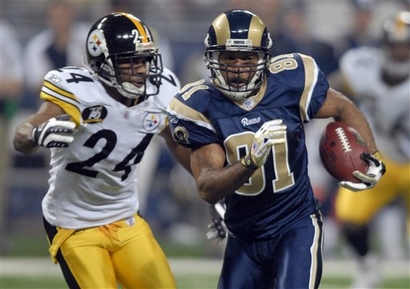 I was shocked when the news broke earlier this offseason that the Titans were trying to make a trade for Torry Holt at the trading deadline last season.  Now with the news today that Holt was released, there is little doubt in my mind that the Titans will at least have him in for a chat, as well they should.

Holt would be an immediate upgrade to the receivers that are currently on this roster.  As I mentioned on the MCM podcast earlier this week, he is just one year removed from a season where he caught 93 passes for 1,189 yards and 7 touchdowns.  Even last season when Holt had a down year for him, his 64 catches for 796 yards would have made him the leading receiver on the Titans by a pretty good margin.

The biggest question mark with Holt is his knee.  His production did drop off by 29 catches from 2007 to 2008, but it is really impossible to tell if that was because of his knee or because of the Rams terrible offensive line and inconsistent play of Marc Bulger.

As with any deal, the terms would have to be right.  Ryan Sax has a FanPost that says the Titans were working on a deal, but it fell through because Holt did not want to restructure his deal.  I would imagine the Titans would offer him a 1-2 year deal with decent guarantees and some heavy incentives.

As long as the money is right, there is no reason why the Titans wouldn't take a flier on him.  Holt would be the best receiver the Titans have had on the team since Derrick Mason left even if he is 75%.