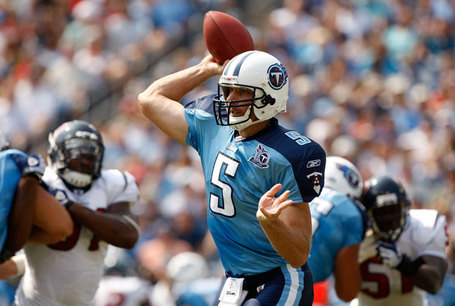 As Chris Carr continues to take FOREVER to make his free agency decision, the Titans continue to work-out possible replacements by brining in former Panthers return man Mark Jones.  Also noted: Eric Green, whom the Titans had worked-out for the same reason, signed with the Dolphins.

Gary Estwick is soliciting questions for new Titans DT Jovan Haye, so if you have a good one make sure you post it in the comments here!

Paul Kuharsky rounds up the usual suspects and gives us the Titans' bounty in their mock drafts... more on Kiper and McShay's picks later today:

PK: My thoughts: Right now, cornerback is the biggest need, but one signing and the Titans won't be desperate for anything. Still, they don't value middle linebackers like a lot of other teams, so I just don't see Laurinaitis. And while they could go Ayers, Brown or Jackson if he's the best on their board, they have a pretty deep pool of defensive ends. The guy who slips and everyone wonders how he's still there, that's who I think they'll take.

SB Nations' Hogs Haven has some great info on the Albert Haynesworth indictment, including the Police Report.

Yahoo! takes a look at the T.O. rumors that ran around Nashville last week.  That was some funny stuff, no doubt.

It's not exactly Jon & Kate Plus 8 (since they take care of all of their kids), but Travis Henry's progeny count jumped to 11 (10 different mothers, mind you) with the birth of twins recently.  This from a cat who was recently jailed for failure to pay child support.

All hail thelogic, who gives us heads-upon this one: The Sporting News is reporting that the Cardinals are shopping Anquan Boldin around the league, even as the Cardinals front office work feverishly to deny such reports.

Great news: staph infections across the league - which have been a huge problem in the NFL over the last two years - are at very low rates and steadily declining, experts report.