Redskins Busted For Tampering By Their Own Player?

Share All sharing options for: Redskins Busted For Tampering By Their Own Player? 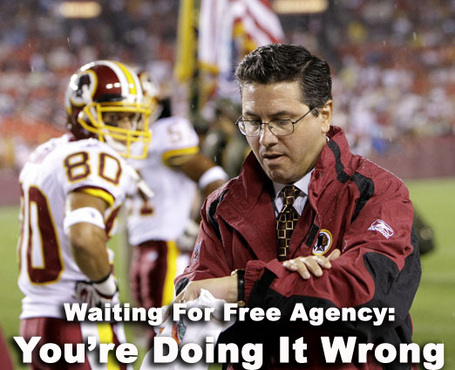 The morning free agency started, Redskins RB Rock Cartwright went on ESPN 980 in D.C. to talk about the Albert Haynesworth signing.  What he said should go a long way towards proving the Redskins tampered with Haynesworth while he was still under contract with the Titans:

Host: At what time did you learn Albert Haynesworth was going to be a teammate, Rock?

Rock Cartwright:  This morning when I woke up I put it on NFL network and breaking news went across the screen saying he had signed for $100 million, but I kind of had an idea they were going to sign him anyways because one of my teammates said they have same agent* and he said that they had been talking.

That's textbook tampering.  The Bears got a pick from the 49ers for tampering with Lance Briggs, and they seemed to have much less evidence.  Plus they didn't even lose Briggs, whereas out attempts to re-sign Albert were blown to bits once that crazy offer hit the papers.

This is tampering at its worst, and Snyder should be hammered by the Commissioner for this.  The 49ers were docked a 5th round pick and had to swap their 3rd rounder with the Bears, so anything less than multiple late picks from the Redskins would be an insult in this case, IMO.