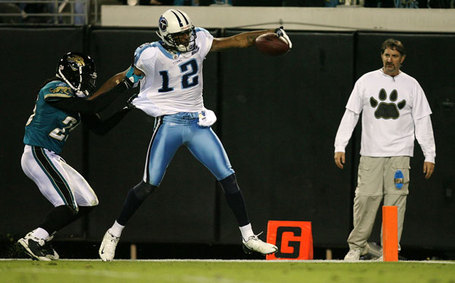 Chris Carr is visiting the Steelers today, where his role would be the exact same as it was here.  We've got to be hopeful that Carr will give the Titans the chance to beat whatever offer may some out of that visit, because losing him to a team where he's playing the same role would hurt a lot more than losing him to a team where he would have a real chance at starting.

The search to replace Daniel Loper kicked off yesterday as former Vikings offensive guard (and Ole Miss grad) Marcus Johnson came in for a work-out.

Gary Estwick has a write-up on Nate Washington that's a good read.  He really reminds me of Cortland Finnegan in some key ways when you look at where they played college ball and the importance of the people who create the support system around them.  His signing with the Titans has even lead to a bit of a religious conversion in little Toledo Ohio:

At Toledo's St. James Church "The Armory," where Washington and his mother are members, the congregation is poised to replace Steelers jerseys with Titans garments.

Yahoo! has a nice quote from the recently added Jovan Haye:

"I say to myself now, I’m back home. This is a place where I visited often. During Super Bowl week, this is where I was the whole week. It feels good. Vanderbilt is right up the street. I have a lot of friends here, and just to have an opportunity to play for a great organization, that was key in the decision."—DT Jovan Haye, who signed with the Titans in free agency.

• The Eagles and Giants, two receiver-needy teams, are in position to deal for Anquan Boldin, who I continue to say will not be a Cardinal by July. Philly has 21, 28 and 53, the Giants 29, 45 and 60. I find it hard to believe the Eagles won't trade for Boldin. Very hard. He's a perfect fit, and they've got the cap room to sign him.

Football Outsiders has taken a stab at creating a statistical analysis at how injuries effected team performance, but it seems deeply flawed for two reasons: it relies heavily on the team-submitted injury reports which are notoriously unreliable (just ask any fantasy player or Pats fan), and injured players don't always miss; often they just play with reduced effectiveness.  Still, it's interesting to see the correlations that do pop-up in their analysis.

If the Titans do jump into the mix for Torry Holt, don't look for the Jets to be part of the competition.