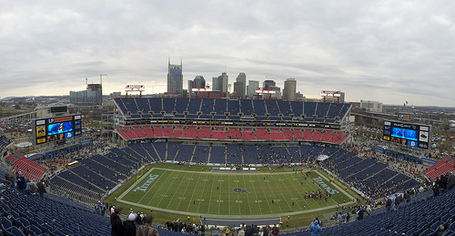 Last year we picked-up Chris Carr as a restricted free agent, and this year it looks like we could do the same with Jarrett Bush of the Packers.  Bush figures to be insurance against Chris Carr and a replacement for the departed Eric King should Carr return.

I have no idea how I skimmed past this paragraph yesterday, but it's worth calling out:

However, don’t rule out a run at Torry Holt if (when?) he is released by the St. Louis Rams. At 32, Holt is nearly four years younger than Owens, and is the type of smart upgrade the Titans have tried to make when looking to add to experience to a position. Holt is due a roster bonus on March 17, which could precipitate his release. Would the Titans be willing to part with a late-round pick to land him before he gets to the open market?

I'd love to see the Titans take a chance on Holt, even if he doesn't have anything left in the tank.  I'd be willing to be that he has a lot more left than he showed last year, but even that 64 ctach, 796 yard performance runs a good chance of being an upgrade over our current options.  He'd be a good guy for the youngsters to learn from as well.

Oh Albert, there's nothing like getting a $100 million contract to revive a court case: the traffic accident case we've been updating you on is headed to a grand jury on March 9th.  We'll let the Redskins worry about that one now...

Matt Jones is an idiot: he violated his probation on felony cocaine charges by failing a drug test due to alcohol.  Expect that screw-up to cost him several games next year.  Although, is there anything more hilariously white trash than violating your probation by drinking beer?  I submit there is not.

Important thing to know in life: Facebook can get you fired.  Also, if you're looking for a job make sure your either off, or completely proper on any social networking sites.  Savvy employers check these things.