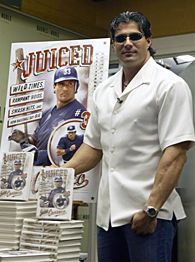 I know this is a football blog, but baseball is my first love, as far as sports go, so I decided I would weigh in on this whole A-Rod steroid deal.  Were any of you actually shocked when this story broke on Saturday?  I know A-Rod was supposed to be the hero that rescued the game from Barry Bonds, but is there anyone out there above suspicion at this point?  I was having a conversation about that with some friends at church this Sunday, and it was really tough to come up with someone who is above suspicion.  The name they kicked around was Derek Jeter.  Would I be surprised if Jeter tested positive, I guess, but I wouldn't be shocked.

The player that I always point to as being above suspicion is Ken Griffey Jr.  Now in full disclosure, Griffey is my favorite player, but the knock on him has always been that he doesn't workout.  That is why he will end up falling short of Hank Aaron's record when so many people had him pegged as the guy to break it.  Even still, if a report came out that he took roids while trying to come back from one of his injuries, it wouldn't blow me away.

Now the discussion turns to what happens to all of these guys, Bonds, Clemens, A-Rod, McGwire, Sosa, Palmeiro, etc., when it comes time for their Hall of Fame consideration.  We are already seeing the effects with McGwire.  He hasn't come close in any of his 3 chances, with his vote total actually going down each year, but of all of the guys mentioned above, McGwire has the weakest Hall of Fame resume.

At some point the voters are going to have to re-evaluate how they think about this era.  You either have to let them all in based on the thought that a very large percentage of the players were using it, or you have to keep everyone out that has had a positive test come out.  Don't let Bonds in because his numbers make it "impossible to keep him out" but keep McGwire out because his numbers are Hall of Fame worthy if there are no steroid suspicions but aren't good enough with that cloud.

Back to A-Rod, I sure hope he takes the Andy Pettitte road and admits that he did it.  What Pettitte said was probably a lie, but at least he didn't take the Clemens approach of attacking everyone and just ending up looking like an idiot.  If A-Rod will come out and say he did it, people will forgive him.  By the time he closes in on Bonds's home run total this whole positive steroid test will just be something that is mentioned along the way instead of being the whole story like it was with Bonds.

Who knew that Jose Canseco would end up looking good in all of this?

Pitchers and catchers report in just a couple of weeks, and it stinks that this whole deal is going to be the focus of spring training.

Many of you may not care anything about this, but it is just something that I wanted to throw out there.  If you have any thoughts feel free to leave them in the comments.