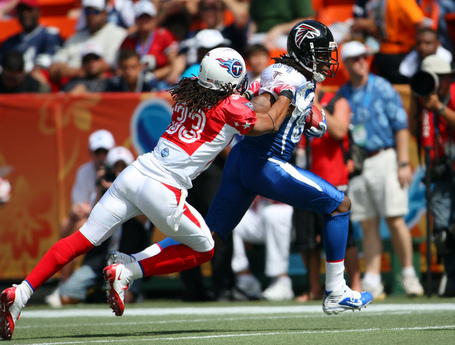 There's tons of scuttlebug that the Rams are going to clean house with new coach Steve Spagnuolo taking over.  Among those in danger of being cut are former Titan Drew Bennett and former all-world WR Tory Holt.  Expect the Titans to take a long, hard look at both players if they hit the market.

TitanRob has a variation on this story in the side bar, but on the heels of the report above ESPN's Rumor Central (Insider subscription required) has the following note about how the Titans nearly traded for Holt before the trade deadline:

According to the St. Louis Post-Dispatch, the St. Louis Rams would save $8 million by cutting or trading wide receiver Torry Holt before June 1, and a veteran scout at the Senior Bowl last month indicated that Holt and tackle Orlando Pace were being floated by the team as trade bait. The team would save an additional $6 million if Pace was cut or traded by June 1.

Holt's production dropped off sharply in 2008, as the team pushed to utilize Donnie Avery more extensively as the team's No. 1 wideout. His 64 catches for 796 yards represented the lowest total since his rookie campaign in 1999, and it was also 29 catches and 393 yards less than 2007.

A league source told the Post-Dispatch that Holt was nearly traded for a first-round pick before last season's trade deadline, and that the other team involved was the Tennessee Titans, a team that has lacked a game-breaking wide receiver for some time.

Some people aren't all too happy with Kerry's quotes from the Pro Bowl, but you have to remember that there are really only 2 types of people he (and every other player) have been hanging out with all week: the highest paid players in the league and vulture-agents trying to lure them by promising how much they can get them paid.

Larry Fitzgerald apparently ate Cort's lunch at the Pro Bowl, not that I watched.

Note to self: doing a national television segments on your humility and gratefulness is neither humble nor grateful.  I mean even Barbara Walters and Brett Favre think this piece is too fawning to be taken seriously.

Jim Wyatt brings a message from the Pro Bowl we're all glad to hear:

Listening to the interviews from all the stars at the Pro Bowl on Sunday, no one sounded more sincere than Titans defensive tackle Albert Haynesworth.
Not Julius Peppers, who made it clear he wants out of Carolina. Not Anquan Boldin, who can't hide his ill feelings for the Arizona Cardinal organization.
All Haynesworth did was reiterate what he's been saying since last year -- he desperately wants to stay in Tennessee.

And finally, check-out some NSFW (for language) video of LenDale's birthday party complete with Snoop in a Titans hat.  Beware of the LenDale freestyle though... that thing was rough.