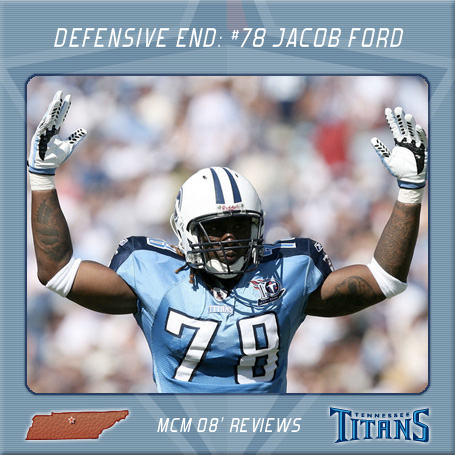 Among the biggest surprises on the Titans roster this year was Jacob Ford. A 6th round pick two years ago who lost all of last year with a preseason injury, Ford proved he was worth the wait by logging 7 sacks as the Titans bet situational pass rusher. He showed good enough strength and tremendous pursuit skills all year. He reminded me of a young Kearse in that so often he was right around the ball when a tackle was made, even if h wasn't the tackler.

Ford gets after it from sideline to sideline and is developing into a real weapon for Wash to use when Boom King moves inside to pass rush. At 6-4 256 lbs, he may never be an every down DE, but Ford was far more valuable this past season than his draft status or salary would indicate.

I only have one question: How in the world to Wash/Fisher/Mikey keep finding these stud defensive lineman from schools like Central Arkansas (Ford), Eastern Michigan (J. Jones), Winston-Salem St. (W. Haynes), etc.?