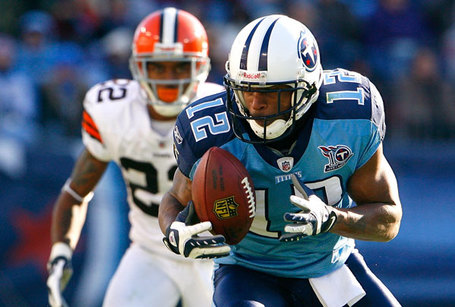 Meanwhile, the agent for receiver Justin McCareins said it’s been quiet so far regarding his conversations with the team.

Paul Kuhrasky makes the prima facie argument for keeping Albert Haynesworth.  I agree with his methods and reasons, and that's truest when it comes to addressing this common meme:

He's going to dog it once he gets the big dollars.

Maybe I am a sucker, but I feel like I've gotten to know him during his career in Nashville and I'm convinced he won't let himself become fat and happy. Here's why.

When he stomped Dallas center Andre Gurode's face back on Oct. 1, 2006, he suffered the consequences with a six-week, five-game suspension. He was a pariah. That was a lot to come back from, and much of his motivation was to re-establish his name. He knew he'd soiled it, and he was embarrassed when he thought about how his kids would suffer for it.

Having worked so hard to erase that stain, I simply don't believe that he'll respond to a big payday by taking his foot off his career gas pedal. If he did, he'd get smeared again. Having been in that unenviable position, I believe he will be very conscious of not getting there again.

In knucklehead news, Jevon Kearse pled his DUI charge down to reckless driving.

Paul Kuharsky is coming strong today, bringing us some thoughts from Rob Rang at NFLDraftScout.com on what the Titans can do at the 30 spot.

Cortland Finnegan says the Pro Bowl is a dream trip, and he was kidding everyone earlier in the year about taking a boat because of his fear of flying.

Look for the Titans to join in on this event next year: the original AFL franchises will conduct "Legacy Weekends" where teams will wear uniforms form the AFL days and special logos to celebrate the 50th anniversary of the AFL's creation.

Mel Kiper breaks down draft needs across the AFC South.  The more I see of that Michael Johnson kid the more I like that pick for us unless someone plummets on draft day.

I'm not one to quote Chris Issac.. ever, but the the Texans may have done a bad, bad thing.