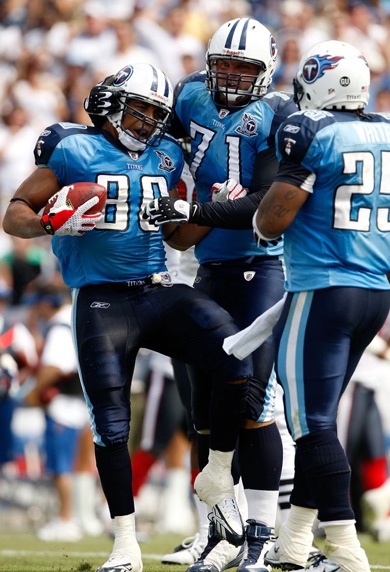 In the biggest non-news to hit papers across the mid-state since water was declared wet, Bo Scaife will test free agency rather than sign with the Titans before the market opens in 3 weeks.  I'm surprised Mort didn't break this earth-shattering news.

Paul Kuharsky is getting closer to what I think the NFL should do if they're moving the Pro Bowl to before the Super Bowl: scrap the game and make it a big money skills competition with feats of speed, strength, skill and a little showmanship.  The players would love it, injuries wouldn't be a real issue and the fans would get to see their superstars do some amazing things.

Hey Steeler fans, be careful what you wish for because it may kick in your door and stomp-out your towel while you cry about it.

The Sporting News ranks the top 10 NFL free agents and puts Nnamdi Asmugha over Big Albert.  I'd have to say that our secondary would look mighty horrifying to QBs - namely a certain MVP QB - with Cort, Griff, Hope and Nnamdi back there.  I think gramsey and I could play DT and get coverage sacks off of those guys.

Proof the NFL is crazy: I would have laughed my brains out last year if you'd have said that Kerry Collins and Chris Simms would be the no. 3 and 4 most desirable QBs in free agency this offseason.

NFL.com draft guru Mike Mayock finally comes out of hibernation to give us his list of the top 5 draft eligible prospects at each position.

Mike Florio: still a petty hater who couldn't land a joke to save his life...

Still, watching Haynesworth thrive with another franchise (such as the Lions, where former Titans defensive coordinator Jim Schwartz is the new head coach) would be better than paying him a king's ransom and seeing him revert to being just "a guy."

Especially if the "guy" in question loses his cool (again) when an opponent is on the ground without a helmet.