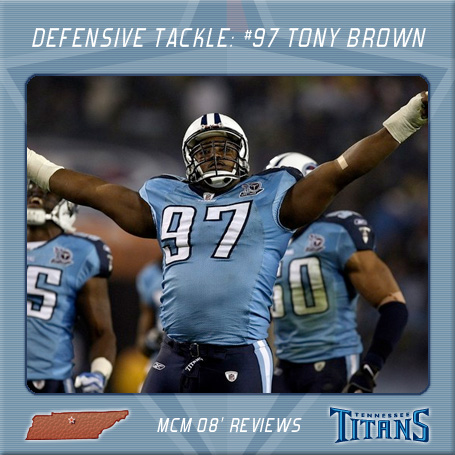 Tony Brown is a case study in an eternal NFL truth: every scheme needs the right players running it, and every player needs the right scheme to run in. A street free agent and NFL Europe alum who went undrafted and was cut by the Panthers, Dolphins and 49ers. Since arriving at Baptist Sports Park, Brown has blossomed into a reliable starter on one of the best defensive lines in the NFL.

It should also be noted that if you watch the Titans defense in person, Brown is definitely the best dancer on the field; a fact he shows off regularly while waiting for the offense to break the huddle. Luckily no one in the stands can hear if he's singing.

Brown's 2008 looked a whole lot like his 2007 campaign... oddly so: he racked-up 52 total tackles and 4 sacks in each year. Brown's play was improved though, a fact that was all the more evident when Albert left the field. In 2007 our Brown turned to butter without Albert beside him, but this year he continually held his own without the big man next to him. Improvements in the DT rotation (Green. Jones and Vickerson specifically) helped his cause, but that shouldn't take away from the fact that Tony has improved every year he's been a Titan. Let's hope that the trend continues, because he's going to need to make a huge jump if you-know-who leaves via free agency.