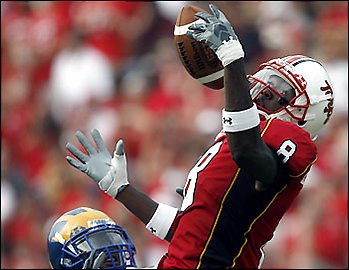 A lot of mocks around the web have us taking the receiver affectionately known as Hey-Bey by the Maryland faithful.  Here are the thoughts of Ben from Testudo Times:

I'd love to give you my thoughts on Hey-Bey. He's a bit of a puzzling guy, because he's an athletic freak but the production has never been quite what anyone expected. We always thought he'd be the top WR in the ACC in his junior year, and it just never happened. Maryland's offense is run-heavy, so it could be that. The quarterbacks have been average at best the entire time he's been here, so that could factor in. But it's always seemed like he's never quite reached his potential.

If it is that one of the things I mentioned above, you're getting a steal. He has freakish speed, good size, and a great attitude. He's pretty strong and can win jump balls somewhat regularly. He's a type of guy who can take a short hook route all the way, or just beat his man downfield to start with. Definitely a very good big play threat, but his game isn't really one-dimensional - he has all the tools to be an elite wide receiver some day. But there's always that little voice asking you if he'll ever actually get there. If his college production was better, he'd probably be in the top 10, though

I would be surprised to see the Titans take a chance on him if he didn't reach his potential in college. They seem to be willing to do that at every position besides receiver.