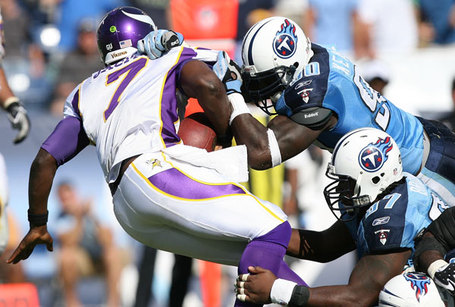 Audiophile commenter kazukirecords passing along some good news for those who think re-signing Albert is too big of a risk/commitment: sources tell Terry McCormick that the two sides are "far apart" on the initial offers.  The question remains, are Albert's demands outrageous or are the Titans playing hardball in these negotiations?

Jim Wyatt reports that talks with Kerry Collins are progressing at a snail's pace.  This isn't surprising to most informed observers though as the Titans (and most teams in the NFL) tend to handle negotiations one player at a time - especially at this time of the year -  and Albert is obviously the main focus at the moment.

Of course you show that same story to Mike Florio and he goes alarmist on it like Collins is putting the squeeze on the Titans.

Here's a gigantic breakdown of free agent players across the league at every position.

Only an ESPN hack prognosticator (Clayton is a good reporter, but a terrible analyst) could forecast next year's AFC favorites and not include the team with the best regular season record in the AFC.  I mean not even a mention.

Now, Yahoo! knows what the eff they're talking about in their initial Power Poll for '09:

2. Tennessee Titans. They need to do everything they can to keep tackle Albert Haynesworth as the anchor of their defense. Then they need to pay Kerry Collins and get him some receiving help — perhaps former Giants teammate Amani Toomer. Otherwise, Jeff Fisher has a relatively young nucleus with Chris Johnson that should only get better.

Since we may yet lose Scaife to free agency, and Alge and Stevens haven't proven squat as Titans we should be paying attention to the fact that Tony Gonzalez still wants out of Kansas City.  If was even open to coming here I'd hope Jeff and Mike would do everything they possibly could to make it happen because whomever out starting QB is would be instantly improved with the best TE in NFL history in the line-up.. and Tony's still got legs left.

Final note, how amazingly awesome would it be to watch this connection in two-toned blue every Sunday next season?