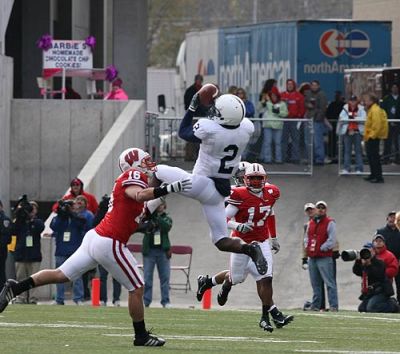 August mentioned this morning that some mock drafts have the Titans taking Derrick Williams the wide receiver from Penn State with our first pick. While I still don't believe the Titans will take a receiver in the first round, Williams is worth talking about so I asked BSD from the SB Nation blog, Black Shoe Diaries, for his thoughts on Williams (I am sure psuphiman can add some things as well):

There are a lot of good things about Derrick Williams. He's fast somewhere in the 4.4 range. He's tough. He runs crisp routes and has excellent hands. I can't ever recall him fumbling the ball. And beyond that he's a great leader in the club house and a model citizen. Anyone who drafts him is getting a team player and a great person.

The draw back on Williams is his size. He's not a big guy like a Randy Moss or Plaxico Burress that's going to use his body to shield off the defender 35 yards down field. He's most effective when he lines up in the slot where you can run him on quick slants and crossing patterns or find the open hole in the zone. He has to outrun defenders to get open, and he needs a quarterback that can get him the ball on time to be successful. The whole key is getting him the ball in space where he can make guys miss and use his speed.

This is why he's such an electric kick returner. He struggled at this in his early years, but this past year he stopped trying to juke eleven guys into missing and just turned on the jets to get up field as soon as he caught the ball. He really turned the corner this year and was much better in this regard. Sometimes he takes chances on punts and he'll dive at a short one. Sometimes he'll muff one and it will drive you mad because you think he's making a bad decision in diving for a punt. But most of the time he makes the catch ok. When you think about the fact that letting it go could have resulted in a 20 yard bounce in favor of the other team they are great plays, but they just show up as fair catches or no return on the stat sheet.

Williams sounds like a guy that would be great fit for the Titans in the 2nd round.  Check out some of his highlights below.