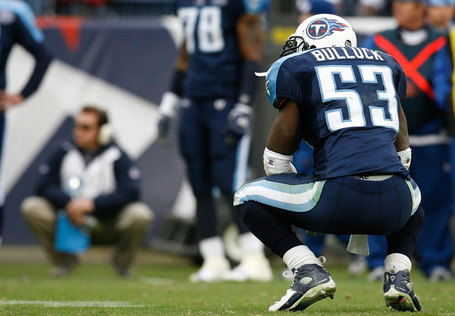 Lets all take a moment today to mourn the passing of Nancy Adams, because no matter what one thinks of her husband as the Titans owner, her charity work is the kind of testament to her heart which anyone would be proud to leave behind.  I extend a special thanks to the Adams' for their help revitalizing my own East Nashville neighborhood after the devastating tornados of 1998 left many homeless.

Paul Kuharsky gives us the early breakdown of the strength of schedule for the 2009 season. However, we should remember that it will almost certainly look completely different after the draft and free agency, and even more different once teams start playing the games that matter.

Meet Melissa Hodges: the Titans cheerleader who is also a molecular neuroscience researcher at Vanderbilt University.  Yeah, you see that everyday.

Here's an area where the Titans could improve: lets try to come in a little lower than 4th in next year's PFT Turd Watch.  That would be much appreciated.

Floyd Reese wishes we would have picked Antrel Rolle over Pac.  I mean hey, it's not like he had anything to do with that decision or anything...  at this point I think we would have been happy with drafting a pack of frozen waffles and a cantaloupe over that idiot.

Here's the first 2nd round mock draft I've seen so far, and their pick for us makes quite a bit of sense:

Tennessee is still searching for a No. 1-type receiver, and Williams has the upside to develop into that kind of player.

In an interesting follow-up to that, the woman who spoke on behalf of Bob Hayes at the announcement ceremony claiming to be his sister may be a con artist with no relation to him at all.  The Dallas Morning News goes more in-depth with this bizarre situation.