Tennessee Titans Morning Links: Also Unknown - What He Looks Like In Shape Edition

Share All sharing options for: Tennessee Titans Morning Links: Also Unknown - What He Looks Like In Shape Edition 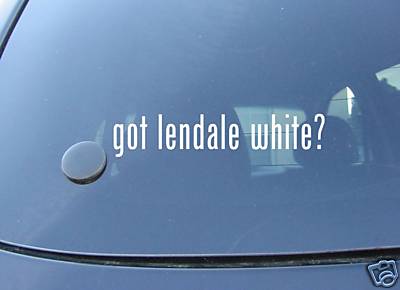 In the first significant local mention of the guy, Terry McCormick says the Titans should at least sniff around on Steelers speedster Nate Washington to see how much he wants when free agency starts.

Rayna Stewart has been hired to replace that Matt Burke guy whom no one knew of until he left with Schwartz for Detroit.  I bet it's safe to say that even if their coaching abilities are even, we've upgraded in stylish headgear, no doubt.

LenDale white was 'involved in an altercation' a few weeks ago, but after review by local police charges have been or will be filed. Here's the run down:

According to a police document where an aggravated assault offense was reviewed, the incident took place on Feb. 14 in Denver when White and other parties were involved in a verbal altercation after a minor vehicle accident. White then allegedly struck Leslie Joe Hoch, a white male.

According to the report, White, listed as an unknown suspect, "began striking the victim with a belt and belt buckle’’ before the parties got in their vehicle and fled. Hoch required hospitalization for lacerations, the offense report stated.

Murray said the case was thoroughly investigated by detectives, with numerous interviews and a review of evidence.

Just friggin' awesome.  This doesn't sound like a pay-off situation at all.  Marvin Harrison sees nothing wrong with this case getting dismissed...

JJ Cooper takes stock of the Titans and their potential roster moves as free agency draws near.  Whatdaya know, we need receivers.

Be hella glad we got a burner at RB last year, because it looks like this year's crop couldn't out run me even if I was smoking during the race.

If you want to keep Albert, then you have to be a fan of this kind of logic:

The soon-to-be free agent is a reported target of Redskins owner Dan Snyder. But many teams are cool to Haynesworth because he is a high maintenance player who might not be as valuable on a new team as he was to the Titans.

The key to Haynesworth's success, many believe, was the coaching of Titans defensive line coach Jim Washburn. He reached Haynesworth on an emotional level as well as a technical level, and it's possible no other coach will be able to keep Haynesworth focused and driven.

Lets hope everybody else thinks that as well.