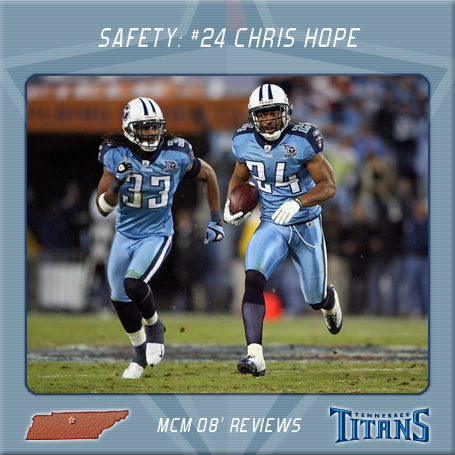 In the heyday of the great Titans defenses we had savvy-veteran safeties like Blaine Bishop and Marcus Robertson. Now we've got perhaps the best of that line in Chris Hope. Hope's 2008 season marked a full recovery from that terrifying neck injury last year in Cincinnati which left him twitching on the turf, and left NFL observers wondering if he'd ever be cleared to play again. As training camp opened last year Hope's availability was still the subject of much concern, but he responded by answering the bell every single week and making his first Pro Bowl.

Hope is a well-rounded player who is a leader on the field and in the locker room from all reports. He's rarely out of position and always a force against the run. He shined on our biggest regular season stage of the year when he snagged 2 interceptions against the Colts on Monday Night Football. He also logged a great game against his former team, the Pittsburgh Steelers, where he managed 8 solo tackles and did a great job helping out a gimpy Nick Harper in coverage.