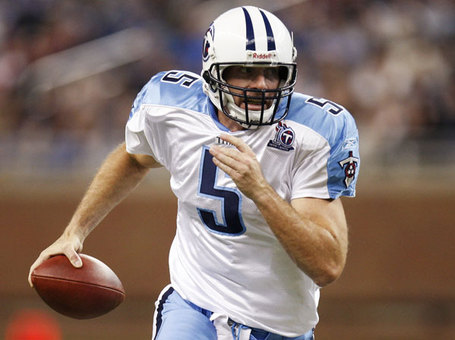 In perhaps the cruelest joke ever perpetrated on the Titans fanbase, the organization and the agent for Justin McCariens say there is no contract, and there haven't even be discussion between the two sides.

In combine news which also gives me a good excuse to link to the best album of the past several years: the 40-yard dash is severely overrated, but it's pretty impressive when a guy runs a clean 4.3 40 like Darrius Heyward-Bey ripped off.  On the flip-side Penn State's Derrick Williams bombed the sprint with a 4.62 40.  Still, don't underestimate the importance of the 100 yard dash; it does a soul good.

The Titans met with Albert's agent Chad Speck at the Combine in Indianapolis, and all reports are that the team significantly increased their offer to Albert.  It's important to remember as we move through this process that it's a negotiation not a coronation; both sides will use the media to their advantage and we're just tagging along for the ride

Paul Kuharsky looks back at all of the steps which led to this point in the Haynesworth Saga, and asks if the Titans and Mike Reinfeldt gave away the franchise option too easily in order to get Albert into camp on time last year

Not everyone in Tampa thinks the Bucs will or should be as quick to open the purse-strings for Albert when free agency starts on Friday.  The one slice of logic that says they may not get as ardently into the mix as we think is that the Glazer family has never been one to give huge signing bonuses and guaranteed scratch in the past.

Peter King says that Redskins owner Dan Snyder, who dinned with Chad Speck last weekend, may be the owner most likely to outbid the Titans no matter what it takes.  You can't really fault a player for taking that kind of money on the only monster contract they'll ever get to sign, but man the Redskins are such a terribly managed organization Albert...

Chris Carr expects to hit free agency, and if he's expecting starter money he'll definitely needs to be looking for it elsewhere.

Worldy reader/commenter Pinoy Titan points us towards this story where the Titans feel pretty sure that they'll be happy to match any other offer Kerry gets on the open market.  They believe Kerry will extend us the courtesy of giving the Titans a shot to match any offer because he really wants to stay here, and we've got one distinct advantage over a place like Minnesota:  It's hard to start a country music career outside of Nashville.

Pinoy also double-dips today with this link where VY met with Fisher to discuss what he needs to do to win the starting spot back.  Regardless of what you think of Vince, there's no way he's giving anything less than 100% towards getting this team back during the off-season.  What I'm anxious to see is if it translates during camp and the preseason.

Do it Mikey.  Do it and get us what may be the best secondary in football, plus we'd be adding a reliable kick returner.  You know you want to...