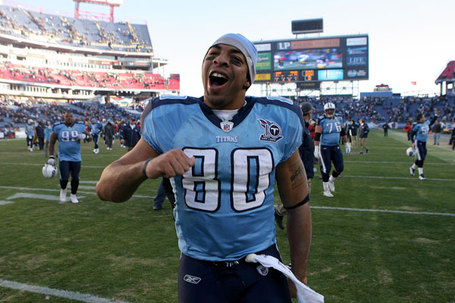 Draft bust Dwayne Robertson is interested in joining the Titans, especially if Albert leaves.  Robertson was a big disappointment with the Jets (where he was miscast as a 3-4 lineman) and Broncos, but for the right price it would be interesting to see what coach Washburn could get out of him.  Even if his production has never matched it, his physical skills are still top notch.

Paul Kuharsky thinks the burst of players getting re-signed and franchised across the league just reduces the number of high-profile player Albert would be competing with for free agent money.

With a nice 4 year deal in his back pocket, Rob Bironas is now lobbying the Titans organization to keep the only holder he's had as a Titan, punter Craig Hentrich.  It'll be interesting to see what happens with Craig because he really broke down the last half of last season.  He's also suffered from chronic back problems the last few years.

Yahoo! has a little more info on Hentrich:

P Craig Hentrich is still expected to retire, but still has not made a final decision on his future. Hentrich has been bothered by back problems over the latter portion of his 15-year NFL career and has had two surgeries, the latest one after the 2007 season.

"I still haven’t decided. I’m just trying to let my body heal up and feel better before I make any decision," Hentrich said.

Hentrich’s contract is up as well, and he can be an unrestricted free agent, but says he has no desire to play anywhere but Tennessee

A good combine performance could put Utah CB/S Sean Smith on the Titans' firt round radar, especially if Vonte Davis and D.J. Moore are gone and Alphnso Smith's character concerns are too great.  Sean Smith brings a freakish blend of size and speed that reminds many of Antonio Cromartie in San Diego... of course it'll also remind Titans fans of Andre Woolfolk.

The Texans put the non-exclusive franchise tag on cornerback Dunta Robinson, making him the first player they've ever franchised. *Update*: Dunta is pissed about being tagged, and he's alleging that the Texans promised him they wouldn't use the designation:

"Tagging was out of the question, according to [general manager] Rick [Smith]," Robinson told The Associated Press. "I was told that. I just feel betrayed. I'm disappointed that they lied to me."

Highly coveted cornerback Nnamdi Asomugha signed a weird, but huge, 3 year deal with the Raiders worth between $45 and $50 million.  I'm glad we didn't have to ggo that high with Cort's extension before the season. Why's Nnamdi's contract so weird?  Check this convoluted mess out:

The first two years, worth $28.5 million, are fully guaranteed. In the third year of the contract, if Oakland wants to keep Asomugha, it must pay him the average of the top five highest-paid cornerbacks quarterbacks in the game or $16.875 million — whichever is greater. If the Raiders fail to pick up the option, Asomugha will become a free agent, with Oakland not having the ability to tag him again.

Anquan Boldin is softening his stance with the Cardinals: yesterday he informed the team that he would be open to signing a gigantic extension despite previously saying he would never re-sign with the team.  How thoughtful of him.