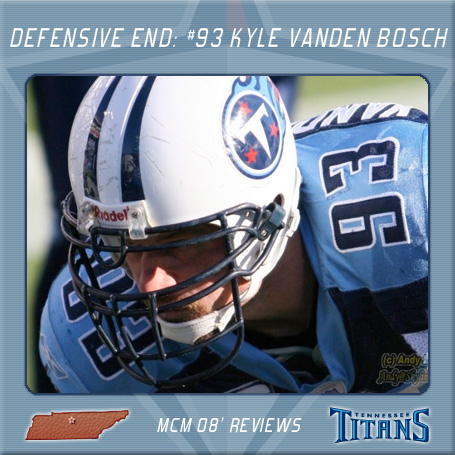 KVB, affectionately known as Boom King around these parts, had a pretty tough year in 2008. For the first time since he arrived in Nashville, the injury problems we all hoped Boom King left in Arizona crept back in and severely limited his contribution after the week 7 game in Kansas City. Though he probably injured his groin in the Ravens game 2 weeks earlier, KVB only appeared in 4 of the next 10 games and was limited at best in those appearances.

Boom King showed a lot of grit in the Ravens game; even though he only tallied 1 tackle in the playoff game, KVB consistently brought pressure and altered run plays.

KVB's injury, along with Mawae's elbow problems, will be the key injuries to watch as training camp and the preseason start up. If Boom King can get back to being healthy and these groin problems don't become a reoccurring issue (always a concern with these types of injuries), then look for him to return as the defensive line's mad dog and a catalyst for the defense just like he's been for the past 3 years. We need him flying around at full speed to keep this unit among the elite in the NFL.