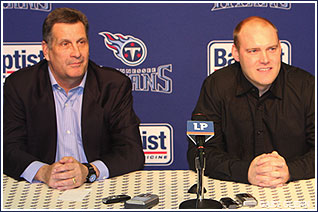 Full transcript from the presser after the jump..

As most of you are aware, last evening the Tennessee Titans and Rob Bironas agreed to a four-year deal. Rob's been a heck of a player for us. He's one of the best kickers in the league. We've had the pleasure of seeing him develop over the last four years into one of the top kickers. He's a big part of what we're about and we're looking forward to the next four years, so we're excited for us. This is a good day for the Tennessee Titans. With that, I'll turn it over to Rob.

First off, I'd like to say ‘thank you.' I'm glad I know where I'll be for the next four years, here in Tennessee. Thanks to the owner, Bud Adams, Coach Fisher, the organization, and all the staff here. It's a great place to play, great coaches to play for. This is where I got my start; getting into the NFL. They gave me a chance when I wasn't sure if I was ever going to get that chance to play when I knew I was good enough to play, but wasn't sure if the opportunity was going to present itself. So yesterday, signing this contract, four years, I knew that it's paid off now and it gives me a little security. Now I just need to work a little bit harder to show everybody that I'm going to be here even longer than that afterwards. So really, just thanks to the organization, the owner, Mike Reinfeldt and Coach Fisher. I'm happy to be here, playing in Nashville with the support of our fans and the community. This is a great place to be. Close to home. And I'll leave it at that.

It is one of those things where you succeed and you keep working harder. The road is never done until you are ready to give it up and the minute you lay back and relax a little bit is when it can be taken away. I worked hard to get here so I'm going to keep working hard to keep it. I'm excited today. It is a good day for me and the organization. I'm looking forward to winning now.

(on whether there was any consideration to go anywhere else)

Playing in Tennessee is what I wanted to do. I wanted to stay here. I'm glad to have a long-term deal put together. I'm glad that my agents at Athlete's First were able to get together with Mike [Reinfeldt] and get this done. All I was reading about through the media sources was the franchise tag, which is a one-year deal. It is seems like since I have been in this league, it has been week-by-week with my first contract, and then I played the tender one year last year. It would have been another one-year franchise deal. I'm glad to have a little bit of security and know that the Titans did what it took to put a deal together with my agent and look four years ahead of me and know I will be here playing in Tennessee.

(on the possibility of Craig Hentrich returning)

I hope Craig Hentrich comes back. He has been a big part of me having my success. He is one of, if not the best, holder in the league. He has been in this league a long time punting really well. What he does for me is totally different with him and Ken Amato. They have been together doing the snapping and holding for me. Of course, without those guys my job is a lot harder. Craig hasn't given me any word one way or the other. It is kind of a decision he is going to sit back and make on his time. I wish him the best either way, but I sure hope to see him back here in a Titans uniform.

(on what team he played for in the AFL2)

Before that I was working at my dad's office for a year-and-a-half behind the desk doing sales and marketing. I talked to my dad and we talked about those days. I'm definitely glad to be out of the Arena League and in the NFL and here in Tennessee.

This is kind of why it's a good story. Rob's worked hard, he's worked a long time. He started kind of at the bottom and worked his way up. He's gone to the Pro Bowl. He's one of the best kickers. It's a cool story.

(on importance of team having a solid kicker in place)

I think it's a key part. I think the way our team is put together relying on defense, we win a lot of games in the fourth quarter. With a lot of tight games, the place kicker is a very important position on our team.

(on challenge of when to use a franchise tag)

We've had discussions about meeting his agent at Indy, sitting down with Chad Speck, Albert's agent, and that's still our plan. We'll sit together, get together some at the Combine and talk to him.

I don't think so. I think we'll still get together with Chad and toss around different scenarios.