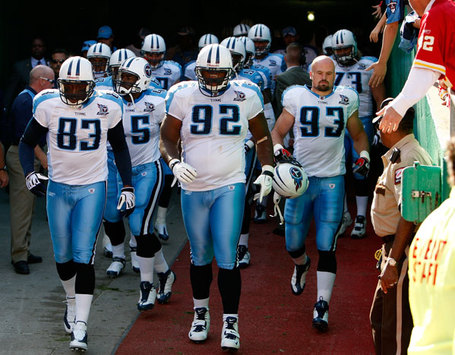 On the heels of yesterday's leak by 'anonymous sources' - is that Chad Speck's middle name now? - Jim Wyatt gives us a taste of what the Titans have been offerening so far: 4 years for $36 million. That's the kind of contract offer a team makes when they've made a list of pros and cons and the cons won.  As Jimmy has loves to say, he gone:

Those looking for a reason to be optimistic should know the two sides plan to continue to talk all the way up until the Feb. 27 deadline. Haynesworth wants to return, and if the Titans step things up they could still convince him to stay before heading into free agency.

The pessimist might look at the past, however. So far, the Titans haven't shown signs that they're willing to pay Haynesworth the big bucks, and it's an organization with a track record of low-balling -- and losing players -- in free agency.

Rob Bironas signed an extension late yesterday that totals 4 years and $12 million. Thank your deity that Mikey got this one done because Rob is beyond crucial for us. Lets hope he doesn't coast now that he's got crazy kicker money.  Question: if a kicker coasts, does anyone notice?

Adam Schefter is reporting that on the heels of the Bironas signing that the Titans will franchise Bo Scaife.  He'll be overpaid a little at $4.46 mill this year, but one of the joys of having copious cap space is having the ability to overpay a little without getting into trouble.

T-Rac's Posse keep the funnies coming in the conclusion of their first round mock.  I agree that Tobias Funke could help the Vikes, but he's overvalued unless he comes with the entire Dr. Funke's 100 Percent Natural Good-Time Family Band Solution and all the Temocil they can carry.  Note to self: if I ever meet the idiot at Fox who canceled Arrested Development I'm going to kick him square in the doink.

Looks like Marvin is done in Indy.  If only there was a team that was intensely familiar with his style of play, had tons of cap room and needed veteran WR help...