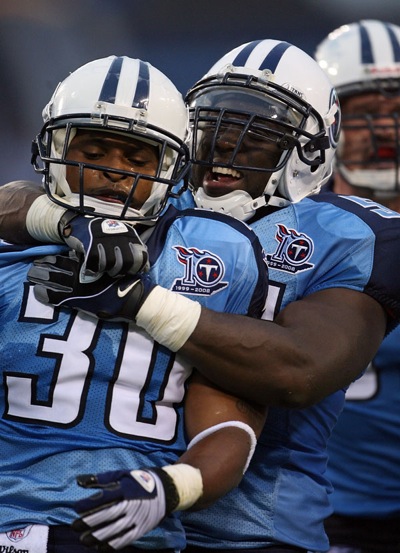 Talks between the Titans brass and our players who are set to hit the open market in two weeks are heating-up, and Chris Carr seems to be one man they would prefer to lock-up before the Feb. 27 deadline hits.

Football Outsiders breakdown the AFC South, and it's worth reading ours as well as the ones for the teams we're going to need to keep waxing to win this division again.

How many more times are we going to see these 'Fisher says Collins is the starter' stories until writers realize that this was nailed down a right after the playoff loss nearly a month and a half ago?  Answer: 1,546,001.5 (Florio is such a hack he only counts for half credit).

Scout.com has their newest mock draft up, and here are round 1 and round 2:

Interested in what work-outs guys go through in the cattle call/beauty pagent that is the NFL Combine?  For our purposes we're going to pretend you said yes because NFL.com has a fancy looking walkthrough of some of the biggies.

Lions WR goes on local radio and says Daunte Culpepper has been named the the Lions starting QB for next year, but the team quickly denies it's true.  Welcome to Detroit Mr. Schwartz (though I hope for his sake that the report is true, and they are just posturing to keep leverage for someone hoping to trade up).

The NFLPA has narrowed the choices to replace Gene Upshaw down to 3 candidates: ex-union presidents Troy Vincent and Trace Armstrong, along with lawyer DeMaurice Smith.