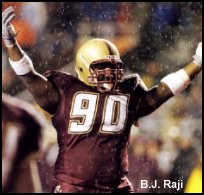 Obviously we are all hoping that the Titans won't need to go defensive tackle eary in this draft because if they do that means Albert is gone, but we are going to take a look at some just in case.  I asked ATL_eagle of the Boston College Blog Eagle in Atlanta for his thoughts on Raji:

Raji came late to football and was a 2-star under the radar recruit out of a smaller program in New Jersey. BC and Rutgers were the only schools that even offered him. He played as a true freshman, which was rare under Tom O'Brien and had an impact right away. His second season was even better as he showed moments of brilliance. His junior year was a bit of a let down. Good but not great and certainly not the next level people expected after the great SO year. Then Raji's career took an unexpected turn. Prior to kick off of his Senior year, he was informed that he didn't have enough credits to play. So he redshirted and watched BC put together its best season in 20 years. The year off allowed him to get in better shape and provided a focus and hunger for this season. His final year, he dominated. He was easily the most disruptive DT in the ACC. He also showed great agility and understanding for a guy his size.

As for how he will do in the NFL...I am not sure. If he stays motivated he could be a very good DT. I think his quickness will be somewhat muted in the NFL where most DTs are fast for their size. But Raji has all the tools and smarts for the NFL. If he continues his hard work and focus and ends up in the right scheme he could be a great player and a great pick.

I have a feeling those Virginia Tech interior offensive lineman still see Raji when they close their eyes at night.

P.S. Don- When you read this guy's name, what does it make you think of?