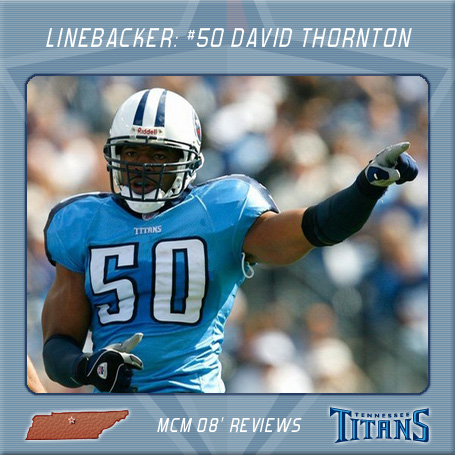 Easily the best free agent signing we've had in years. David Thornton joined the Titans in 2006 and made the jump from being a nice LB with one great year on his resume to being a beastly addition to one of the league's most under-rated linebacking corps in recent memory. The only reason Bulluck and Thornton aren't in the Pro Bowl every year is because we don't blitz and they're both so damned good they split the tackle numbers on guys lucky enough to make it past our front 4.

Thornton is a beast against the run game. He's disciplined, strong and takes great angles; you don't see him running at a guy only to have to curve back up-field and chase him from behind. He's also been healthy as a horse. Thought he struggles in pass coverage sometimes, Thornton is the near-prefect complement to Bulluck he's guaranteed to keep containment on his end and free up Bulluck to patrol the second level like a safety on passing downs.

Some misguided oafs will tell you he's our best linebacker. He isn't, but he's an excellent compliment to Bulluck's more well rounded, game changing style and a key cog in the league's best 4-3 defense.