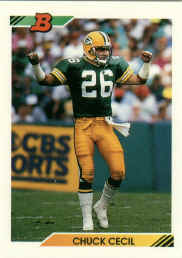 The complete transcript from yesterday's introductory press conference after the jump.

If you look back over the last six to 10 to maybe 12 weeks, the one thing that stands out about the National Football League is change.  This year I think change in head coaches and coaching staffs, this was an unprecedented year.  There were 11 changes and as a result obviously of one of those changes we lost two good coaches and that moved on and were promoted.  Part of the ongoing process from our responsibility is to make sure that I have people in place to take over and move on and to improve.  I have taken a great deal of time.  Chuck [Cecil] and I spent a great deal of time discussing what we want to do and what we have to do and I'm very, very excited to be able to say and introduce to you our new defensive coordinator Chuck Cecil.  I'm excited for him.  I'm excited for the future of this defense.  He is without question the best man available for this job and he was right here, no different Jim Schwartz.  I promoted Jim after two years within this organization and Gregg [Williams] after three years within this organization.  Stability and continuity are very, very important to us and maintaining status quo from a defensive standpoint is very, very important to me.  Chuck brings a great deal of experience.  He is prepared.  He is ready.  He has his hands full.

The one thing in common between all of them  ... we will have to go back with Gregg, but Gregg also started in the same position that Jim and Chuck started with and that is in the defensive quality control area.  That is the nuts and bolts of the defense.  That is where it starts.  It is breakdown, it is takeoff, it is tedious hours and those types of things, learning the system and probably more important than that learning the offense and offense around the league.  That is what Chuck did his first couple of years here.  We had to teach him how to turn on and off the computer and once he got that figured out, he took off and ran with it.  Of course the last couple of years the job he has done with the secondary, he has a complete understanding.  That is the process here for the most part in the organization is to develop and bring people on.  That is what we have done.

(on how much freedom he will have in calling the defense)

I haven't really talked to Jeff [Fisher] much but I have always been a big fan of Rex Ryan and Dick LeBeau, so I'm really thinking about putting in the 3-4 defense to start. [laughter]  Just kidding there.  Obviously, this was not a snap decision on his part or our part or my part.  We wanted what he talked about, continuity.  We kind of build this defense and Jimmy [Schwartz] was the coordinator but it was really kind of as a group.  It was a group effort, so basically we are going to try to continue to do the things that we have been doing and just do them a little better.

I have had discussions with Dave and Dave was very much in favor of Chuck taking this job.  Dave has been a great support system for me and the rest of the defensive coaches and wants to continue in that role.  What you don't get a feel for sometimes on staffs are the guys that do a tremendous job behind the scenes.  Mike Munchak for example on offense.  That is what Dave is.  I think Dave's greatest value to this defense is the behind the scenes, so to speak, and being that guy that is going to support Chuck.  Dave and Chuck, as you can imagine because of the relationships between the DBs and linebackers and run fits and coverage, have to work very, very closely together.  They are on the same page and Dave is very much in favor of this decision.

From an experience standpoint Jimmy had two years.  Jimmy was a quality control coach and the next year he was a linebacker coach and worked on our third-down package and then Gregg left and then I promoted Jim.  I'll date you but there were a lot of people that second-guessed that decision.  Chuck on the other hand has seven or eight years of experience here.  Chuck has worked with Jim.  He has been in the box.  He has heard every call.  He has watched everything, every play during the ball game.  To me it was an easy decision.  One of the reasons it has taken so long to announce it was we were very much interested in hiring Tim Hauck who is going to take over for Marcus.  Marcus Robertson will be promoted to the secondary job.  We obviously considered the recruiting aspects at UCLA.  Tim will come in.  Tim has played with Chuck, knows Chuck and played in the league for 13 years.  He will be a great fit for the defense as well.  We wanted to be aware of UCLA's needs.

(on perhaps rolling the dice on a first time defensive coordinator)

Well, it's obviously a big challenge when you're now the guy that's actually making the call on every down.  You're the guy.  But that being said, I cannot stress to you enough about the support system that's involved, and I was part of the support system.  With guys like Wash [Jim Washburn], now Marcus, Tim Hauck and Dave McGinnis - first of all, I can't say enough superlatives about him, not only as a friend but as a human being and also as a coach.  So when you say ‘daunting,' it's not about me, OK?  I'm basically just going to be a by-product of the group effort.

Well I did that when I was the secondary coach because obviously he makes the ... A guy like that up front - I'm not telling you guys anything you didn't watch - a guy like that makes the secondary better because that ball has to come out of the hand faster and quarterbacks have to make quicker decisions.  Getting him back obviously would be a great thing for the defense, but whether or not he's here, we will still line up with 11 guys on the field and play Titan defense.

(on if he ever considered any outside candidates)

No, it was important to me to keep things going.  That kind of change really can affect your defense, can affect your personnel priorities and so on and so forth, and we've got a great group in place.

I hope not.  I don't think they could afford it nowadays.  No, believe me.  I'm not here to try and turn our guys into anybody.  They're already great players, and they've already proven themselves.  They'll continue to prove themselves again next year.  We'll just have to wait and see what happens after that.

You know, yeah, it's hard to believe.  It seems just like yesterday, I've got to be honest with you.  My wife, you all know her.  Like I said, I'm not going to sit here and tell you I have all of the answers.  I have a couple of them.  If you want all of the answers, you need to call my wife because she does.  It was funny last night.  She said, ‘Gosh, it seems just like yesterday when you were making $60,000 and working 17 hours a day.'  And I want to say thank you to her for believing in me because she is the love of my life.  I can't thank her enough.  This would not have been possible without her support and her love.

(on if as a player he would have envisioned doing this)

Well, I really didn't think I would survive this long, to be honest with you.  I wasn't planning on it.  But I did make it this far, and I'm happy to be here.  I love the game of football.  How far it was going to take me?  I really hadn't thought a whole lot about it.  Being a defensive coordinator obviously is a big responsibility, and I've always been about big responsibilities.  So I think I'm ready for it and ready to rock and roll.

You know, as you have an opportunity to coach a number of players over the years, there's always one or two a year that you come across that you think have an opportunity to become good coaches.  But of those that you cross paths with, rarely do you find one that's willing to put the time in and that knows what's required of you to put the time in.  Certainly, Chuck did.  I remember him as a player for us, just that one year, I mean, he knew the defense probably better than some of the assistants on the staff at that time in a short period of time.  When you know things inside and out and you're able to adjust and anticipate, you can be successful.

(on the similar head-coaching career paths of Fisher, Gregg Williams and Jim Schwartz)

You know what, I'm going to try to be a good coordinator first, and then I'll worry about the next step.

Coach Schwartz expressed interest in taking with him a number of coaches on this staff, and the only one that we gave permission to is Matt Burke.

(on how much of a pay increase he receives)

I'll make a little bit more.  I won't miss any meals.  You don't have to worry about me, and I'll be able to send my daughter to college, probably.