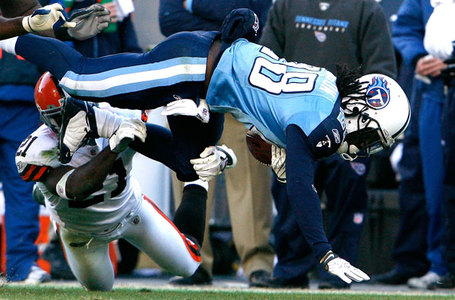 Word around town this morning (namely Wycheck's morning show) was that the Titans will formally announce Chuck Cecil as the new defensive coordinator sometime today, so be sure to stay here at MCM and just keep hitting refresh because we'll post it as soon as we have definitive word!

Albert Haynesworth's contract offer from the Titans has been accepted... by reserve lineman Daniel Looper.  Hardy-harr you crazy Tennessean writers.

LenDale's uncle/trainer says White has lost 4 pounds since the end of the season and will be around 230 (10 pounds below where he was at the end of the season) when he reports for the off-season conditioning program next month.  Did we mention LenDale is coming into the last year of his rookie contract?

Steelers devotee and Fanhouse blogger JJ Cooper breaksdown Nate Washington from a fan's perspective, and he still sounds a lot like Brandon Jones to me:

But NFL teams need to know what they are getting. If a team is looking for a solid No. 2 receiver who can get deep on most anyone, then Washington would be a great acquisition. But Washington's hands are not consistent enough to be a No. 1 receiver, and he's not nearly as comfortable moving the chains on slant routes as he is at running a fly route.

Washington's catch percentage (percentage of catches on passes thrown his way) according to Football Outsiders was 51 percent this year. It was 52 percent last year and 51 percent in 2006, so it's safe to say that Washington usually catches about half the passes thrown his way, which is one of the worst percentages in the league. Partly that's because Washington runs a lot of deep routes, but it's also because of his questionable hands.

Think of him as an Alvin Harper. When Harper was with Michael Irvin, he was a very productive player as a deep threat that took some attention away from Irvin, but when the Buccaneers tried to make him into a No. 1 receiver, he was a big-time bust. I'd be shocked if any team out there thinks that Washington can be a No. 1, so maybe he will fit for a team like Tennessee where he could give a big-play spark that was lacking.

Clifton Brown re-visits the career arcs of the last 10 QBs taken in the first round.

While the Titans did get a nod for best team in 2008, overall we got stiffed like a Spike Lee joint in USA Today's NFL Oscar awards.

PFW finally gets around to their divisional wrap-ups for the 2008 season, and here's the AFC South's.

The Bengals are looking less and less likely to franchise T.J. Houshmandzadeh, who remains our best option on the free agent market baring a trade for Boldin.