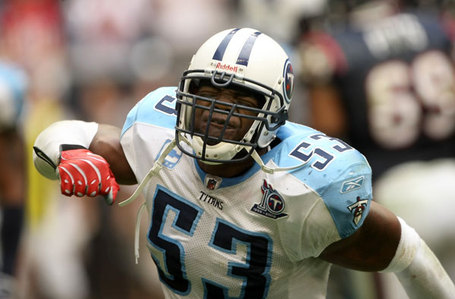 Want to get in on the MCM commenter mock draft?  We still need folks to pick for the Seahawks, Bills, Patriots and da Ray-dahs.  Leave your name and the team you want to draft for in the comments section, and we'll start setting the board for the cage-match fights to see who gets to draft.

There was some discussion about Chris Simms' future as a Titan on MCM yesterday, and Terry McCormick caught-up with him for today's report.  Simms knows he's going to be a back-up wherever he signs, and he's hopeful it's with the Titans.  He is also saying the team has already reached-out to his agent and want to bring the kid back for next season.

Head on over to T-Rac's Posse for the funniest mock draft you'll see all year, where draftees include Jim Jones, Barack Obama and Buffalo Bill.

There's a late round WR-sleeper busting his hump just down the road in Franklin, and his name is Lucas Taylor.  The UT grad had a disappointing senior year, but if you saw UT's QB play then you understand why he caught nearly 50 less passes.  I'm in the D1 complex a few times a week and haven gotten a chance to talk briefly with Lucas, and he seems like a good kid who really is working harder than most of the cats training over there (who include several 2nd-3rd rounders).  Just think about this: if he'd have come out last year, he would be boasting 73 catches, 1,000+ yards, 4TDs in the SEC and to go along with his recently-run 4.38 40 time.  Tell me that's not a guy worth a 4th-5th round look.

Insider subscription is required, but ESPN has a nice read with FO's Doug Farrar on how the 2009 AFC South will be all about the quarterbacks, including Vince Young:

Many college quarterbacks succeed in the shotgun-heavy spread, in which multiple-receiver sets and wide blocking lanes extend defenses to their breaking point, only to find that the speed and complexity of the NFL trip them up. It's not an individual indictment of Young -- from Andre Ware to Alex Smith, shotgun option quarterbacks in many different systems have found the NFL tough to navigate.

The Titans have met Young halfway on his transition to the NFL style of play, and it will be up to Young to reciprocate if he's to make the unlikely jump back to his former status as "The Franchise."

American hero/reader/commenter Rustmeister has some predictions on what will happen with the Titans' roster this off-season.

The Bucs are looking to address their defensive line in the off-season, and many of their fans are yelling for big Albert... the Bucs may have as much as $40 million in salary cap space to work with.