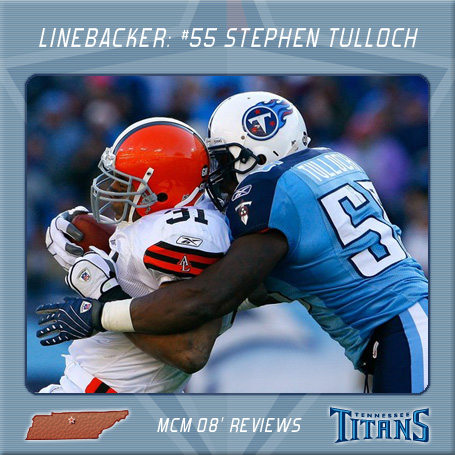 For years MLB has been a part-time position in the Titans' defensive scheme. Since we play a division rife with good QB's and teams who love to run 3 wide receiver sets, one could argue that the nickel back spot is more valuable than the MLB spot. Combine the air assaults with a lack of power runners in the AFC South and you get a MLB spot which has only seen the field about 35-40% of the snaps each of the past few years. You need to know that when you look at Stephen Tulloch's numbers, because those numbers don't show just how good of a year he had.

After taking over for Ryan Fowler in week 4 against Adrian Peterson and Minnesota - a trial by fire if they’re ever was one for a MLB - Tulloch proved to be a huge upgrade in every facet of the position. He's a superior athlete, which makes up for his lack of height. His instant upgrade in speed over Fowler was very important for us because since our LBs don't blitz they need to be able to cover, and the MLB must make 15-20 yard drops very quickly.

Tulloch is a very good tackler in the phone booth and in the open field and flies from sideline to sideline. By the second half of the year Tully had improved greatly in the one are that stopped him from being a starter last year: shedding blockers - especially centers and guards coming through to the 2nd level. He used to get consumed by lineman and tight ends who got a jump on him, which resulted in a huge lane up the middle if Hope or Gruff were occupied.

The real point of all this is that Tully should have the MLB position locked-up for years to come, which only further solidifies the young and talented core (Griff, Cort, Brown, J. Jones) at the heart of this defense who are destined to become the leaders when we need them to step-up.