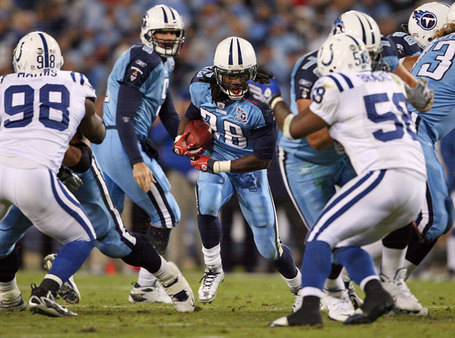 NFL.com is reporting that the Tennessean is reporting that Chuck Cecil will be the next defensive coordinator for the Titans.  That wouldn't be weird except the Tennessean hasn't reported that, we just have Wyatt saying that's the impression he's getting a few weeks ago... I'd expect the announcement to be made in the next day or two though (For those who missed it the announcement was delayed last week after the passing of Mrs. Adams).

Paul K breaksdown each AFC South team's most hot button issues this off-season, including a call for the Titans to add a WR (duh) and install more blitzes for next year in case Albert bolts.

Former NFL personnel guru and National Football Post founder Michael Lombardi has Bo Scaife as the best 3 down TE on the market... of course he's the only one on the market that can catch and block like a starting TE should be able to.

Yahoo! and the National Football Post have a new 2 round mock draft up, and there are some familiar names next to the Titans':

The Titans have consistently overlooked the wide receiver position on draft day, but it’s time they bring in a big-time vertical threat who can stretch defenses and make plays down the field. Heyward-Bey is possibly the draft’s most intriguing size/speed prospect. He still has a lot of developing to do, but the guy has the potential to blossom into one of the league’s more gifted vertical threats.

You know who this guy is starting to sound like to me?  A bigger Lee Evans.  That's a good thing.

An explosive tackle who might end up replacing Albert Haynesworth if he isn’t re-signed.

Don Banks hypothesizes on who could be primed to make a run at Albert Haynesworth, and the list consists of Detroit, Green Bay, Chicago and Atlanta.  I can deal with that list because if we all have even money there's no way he picks one of them over us based on intangibles.

The United Football League is looking like it may actually kick-off in 2009 after a few years of false starts, and they're looking at bringing in Michael Vick.  It should also be noted that the league's commissioner is Pac's original agent Michael Huyghue.  Sounds like this league could carve-out a niche as a prison all-star consortium.