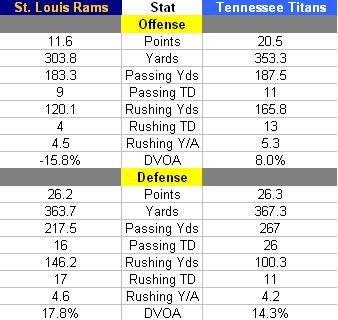 As smash pointed out this morning, this is the first team the Titans have played this season that has a record worse than the Titans.  Pretty amazing.  The key for the Titans in this game will be handing the ball to Chris Johnson.  The Rams have the 28th ranked defense in the league so if CJ is going to make a run at 2,000 and Eric Dickerson he needs to have a huge game in this one.  There is also a good chance that Vince Young's mobility could be limited in the game because of the knee injury.  Getting CJ going early can take the load off of VY and allow him to not put as much stress on the knee.

The Rams pass defense is better than there rush defense, but that is probably more of a result of giving up so many yards on the ground than anything else.  They only have 8 interceptions on the season and will be without starting safety O.J. Atogwe who was placed on IR this season.  The Titans should be able to more the ball through the air in this game if the need presents itself.

Everything on the Rams offense with the exception of Steven Jackson has been a disaster, but Jackson has been a star.  He is second in the league in rushing and has done it on a team that has no real threat of a passing attack.  The Titans defensive game play will start with stopping Jackson.  He has a good combination of power and speed and catches the ball pretty well out of the backfield.  If the Titans are able to stop him it should be an easy win.

Kyle Boller will get the start for the Rams at quarterback because of the injury to Marc Bulger.  The Titans have seen Boller in the past when he was with the Baltimore Ravens.  Boller has played in 5 games this season and thrown 6 touchdowns and 3 interceptions.  Their best receiver is Donnie Avery who I am still very angry with because he was one of my sleeper picks in fantasy and has been terrible.  That means he will probably go for 150 and 2 TDs tomorrow.

This is a game the Titans will win if they play well.  Here's to hoping they do.