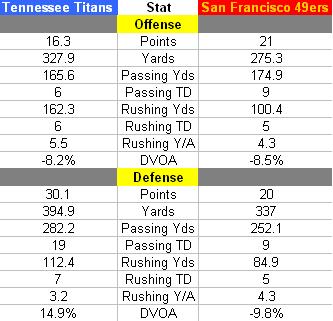 We have talked about how the offensive line looked better last week against the Jaguars which begs the question of whether the line got better or just looked good against a weaker Jacksonville defense.  They will get the chance to answer that question on Sunday.  The 49ers defense leads the league in yards per carry on defense and are second in the league in yards per game allowed.  Those numbers are even more impressive when you take into account that they have faced Adrian Peterson, Stephen Jackson and Michael Turner already this season.

This game will also be a good test for Vince Young.  He was very proficient against the Jags, but the 49ers will prove a much tougher test.  It is a pretty safe bet they will stack the box early in an effort to stop Chris Johnson.  VY will get his chance to throw them out of that.  The 49ers are ranked 28th in the NFL in passing yards allowed.  Hopefully Vince will be able to take advantage of some opportunities early in the game to loosen up the defense for CJ.

The 49ers offense goes through Frank Gore.  Gore had a 364 yards on 65 carries this season.  He is a big play guy (he has TDs of 79, 80 and 64 this season-61% of his yards for the season are on those 3 runs) so the Titans better tackle better this week than they did last week against Jones-Drew.  San Francisco has some offensive line issues, and the Titans have been pretty good against the run.  As long as they make tackles this week they should be able to at least contain Gore.

The 49ers are in a very similar QB situation to the Titans.  They have turned back to their high draft pick from a few years ago that has been buried on the bench.  Alex Smith replaced Shaun Hill two weeks ago against the Houston Texans.  He had a great second half going 15 of 22 for 206 and 3 TDs.  All 3 of those TDs went to another high draft pick that had been underachieving in tight end Vernon Davis.  Davis has emerged with the resurrection of Smith catching 10 passes and 4 TDs in Smith's game and a half.  Davis will present a challenge for the Titans' linebackers and safeties that are trying to cover him.

The other weapon the 49ers boast on offense is late arriving rookie wide receiver Michael Crabtree.  Crabtree, the 10th pick in April's draft, has wasted no time getting involved in the offense He has 11 catches for 137 yards in his two games.  Hopefully Chuck Cecil will match Cortland Finnegan up with Crabtree for most of the day.

This game will be a challenge for the Titans, but it is a game they can win if the defense continues to improve, and the offense takes care of the ball.