Share All sharing options for: Tennessee Titans Morning Links: That One Needs A Nickname, People Edition

The increased accuracy, improved timing and sounder decision making of Vince Young were all on display yesterday, and we wouldn't have won had we seen anything less. I honestly can't think of a quarterback who has made bigger strides in a year and a half on the bench than Vince Young.  That's a tribute to his hard-work, intelligence and maturity.  The Vince Young we saw in 2006 and 2007 was hard to coach and overly-enotional.  The Vince Young of the past five games must be soaking-up Mike Heimerdinger's lessons like a sponge.  It's going to be fun watching him do what no one else in the NFL has done so far this year: smoke the Colts.

I agree with Jim Wyatt: though Vince Young's early list of comeback wins as a Titans is impressive, yesterday's 99-yard march takes the cake.  Given that every single game is must win for us now, that was the stuff legends are made of.

Don Banks breaks-out a near perfect comparison for Vince's performance:

The only one that would have been better was Montana-esque.

Jim Wyatt tells us that he's hearing LenDale was inactive for this game after being late to a walk-through on Saturday.  It was the first game LenDale has missed since he was drafted.  I'm guessing this was also a message to the veterans on this team whose playing time are in jeopardy: there's no room to be slacking.

Follow us through the jump as we give love, love and more love...

How great was it to see Kenny Britt, Lavelle Hawkins and Jared Cook play critical parts late in the game?  We'd all expected Britt and Cook to step-up in their rookie campaigns, but Hawkins had been pretty much left for dead after being completely silent for a year and a half.  He showed some nice skills and ability to get open we needed yesterday.

OK, this needs to be said: Nick Harper was not a complete disaster yesterday.  He got beat twice, but they weren't for huge plays.  He kept plays in front of him and provided excellent run support (led the team in tackles).  I know that won't be popular, and I've been killing that man more than pretty much anyone on the internet, but I'll give him his due for his first good game of the year.

Mike Florio takes a look at the undeniable awesomeness that is Chris Johnson's 2009 season.

For all the improvements Chris Johnson has made this year, an anonymous NFL personnel man correctly pointed out the two most important areas he's improved:

"No. 1, he is doing a much better job of running inside," said the personnel man, speaking on condition of anonymity. "… And his pass protection is much better. He's become a complete back out there. He's always had the speed to outrun everyone."

The personnel man also noted that Johnson has much better lateral agility than he's given credit for. "(Johnson) can cut on a dime," he said.

In short, Johnson will be very difficult for Tennessee to take off the field as long as he stays healthy.

Dan Graziano of the AOL Fanhouse asks the question you'll hear a lot this week, and even more if we dump the Colts: Can these guys seriously pull of the miracle finish and make the playoffs?

Ron Hood was inactive because he was sick, according to Terry McCormick.

My boy spencer096 at MajorLeagueJerk.com says it all when it comes to the new VY:

And I feel bad for not getting into VY’s 4th quarter drive that was just about as good as it gets, but just go read a recap of his NC win and put Titans in for Longhorns and there you go.  That TD to Kenny Britt was a helluva throw.  Uncle Rico my ass.

Check-out the pics of T-Rac's Posse's group outing to LP Field, and the lesson learned was RESPECT THE NOSE BLEEDS.

Late addition to the links, but TBL has a bunch on VY's resurgence.

You gotta love the 7 Word Re-cap from the broadcast yesterday (hat tip to Randolph WInston for the pic): 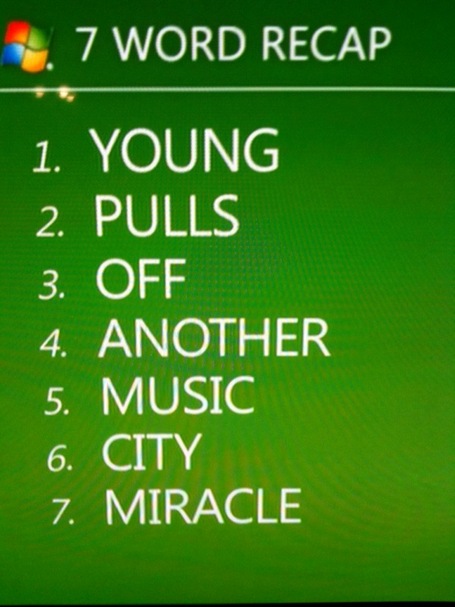 Every time you read a great Titans-related story on the web and don't share it with the MCM community through the fanposts, fanshots or by emailing me at mcmaugustwest@gmail.com Peytoon Manning makes YET ANOTHER commercial.  Is that what you want?!!!!?!?!