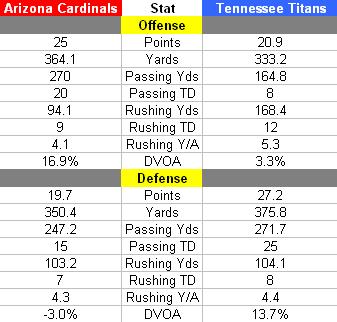 The numbers for the Arizona Cardinals look a lot like those for the Houston Texans.  They have a devastating aerial attack and are decent to not very good running the football.  The key on defense will be keeping the Cardinals from getting the big play with their excellent receiving tandem of Larry Fitzgerald and Anquan Boldin.  Kurt Warner is a very accurate quarterback who does a great job of finding the open receiver and getting him the ball.  The Titans defense has been better of late, but they still gave up some big chunks Monday night against the Texans.  The worst thing that could happen in this game would be to give up some big plays early and dig a hole for Vince Young and the offense.

The Cards are 27th in the NFL in rushing which is a little surprising considering they have two pretty talented running backs in Tim Hightower and Beanie Wells.  Obviously part of the low rushing number is because they are so successful throwing the ball.  The key here for the Titans will be to stop the run with their front four so they don't have to take anyone out of pass coverage for support.

The Arizona defense has good numbers against the rush, but they have given up a 100+ yard rusher in three out of the last four games.  One of those 100+ yard rushers was Justin Forsett.  (Don't feel bad if you have to Google his name.)  Chris Johnson can run against this defense.  The key there is the defense being able to keep it close enough that the offense doesn't have to abandon the game plan.

The key for VY will be to keep doing what he has been doing- keep taking the throws that are there, not forcing things and making a few plays here and there with his legs.  Their pass defense hasn't been good so Vince should be able to make some plays down the field.  Obviously the worst thing that he could do in this game would be to turn the ball over a couple of times and give Warner and company a short field.

The Cardinals are a very good team, but they are not a team the Titans we have seen since the bye week cannot beat if they play well.  I'll take the Titans on another game winner late by Rob Bironas.