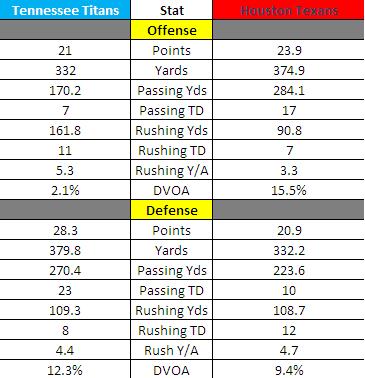 No doubt the Texans have put together some impressive numbers.  The most impressive being the passing numbers.  We have seen first hand how dangerous their passing attack can be.  In my heart I believe that the Titans have fixed a lot of the problems they had early in the season, but no one really knows if that is true or not until they take the field tonight.

Obviously a lot of the talk this week has been about Nick Harper and if he is going to start or not.  Harper has been bad, and I have to believe he will continue to be, but the bigger issue in the first meeting with the Texans was the play of the safeties.  Hopefully Chuck Cecil has drilled into their heads that the run is not their responsibility.  They may want to go ahead and key on that guy who is one of the top 5 receivers in the NFL.

Hal said to me earlier today that the Titans need to strip Steve Slaton early and get him off the field.  I couldn't agree more, especially considering that the only NFL games of Slaton's that I have watched have been the three against the Titans.  He was really good in 2 our of the 3.  I would feel much better with Ryan Moats/Ankle Brown/Fumble Foster carrying the ball.

Offensively it is all about putting points on the board.  Even with the Titans being better on defense than they were early in the season, I still think the Texans are going to get their points.  That starts with Vince Young.  He has played efficiently in his three starts, but he faces his biggest test tonight- not because the Texans defense is that much better than what he has faced but because of the tough spot any turnovers could put the team in.  The good news is that VY has always played his best on the national stage.  Add that to the fact that he is playing in front of the hometown crowd, and I think we will see big things from Vince tonight.

While Vince's play is huge, we all know where the bread of this offense is buttered- Chris Johnson.  The Texans have actually been very good against the run the past month, and they weren't that bad against CJ the first time minus the two big TD runs, but those still count and that is the beauty of CJ.  He can make a good game by a defense look bad on one or two runs.  Here's to hoping tonight is another night like that.

One advantage I believe the Titans have that can't be quantified is that all the pressure in this game is on the Texans.  This may not be the biggest game in franchise history, but it has to be close.  They currently sit at 4 losses, only have 1 win against a team that would be in the playoffs if the season ended today, and still have games against the Colts and Patriots on their schedule.  They really, really need this game.

The Titans on the other hand are pretty much out of it.  They are just playing to be spoilers at this point, and if they look up in a month and are in the mix it is a bonus.  No better team to start the spoiling with than the Texans!