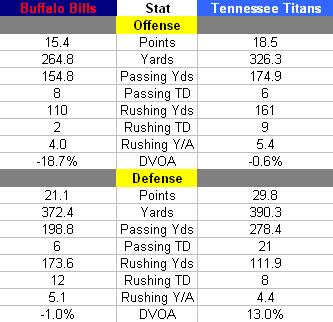 On paper this game sets up to be a huge one for Chris Johnson.  The Buffalo Bills are dead last in the league in rushing defense and yards per carry allowed.  Brian from Buffalo Rumblings didn't sound real confident in his ability for the Bills to stop the run.  Here was his response when I asked him how they will stop CJ:

Pray. Seriously, I don't know what they'll do. They'll be short-handed at DT, where they'll be dressing only three guys. Their linebackers and defensive ends aren't the most athletic guys in the world. Bryan Scott, our opening-day starter at strong safety, will be starting at outside linebacker this week. We're really overmatched. It's going to take seven or eight - perhaps even nine - in the box, and impeccable tackling, to keep Johnson's numbers low enough to win the game.

CJ currently needs to average just over 130 yards per game the rest of the season to get to 2,000.  That is still a high number.  This game provides the perfect opportunity for him to cut into that number.

The Bills defense has some really good numbers against the pass, but it is tough to say how good there pass defense is because they are so bad against the run.  One guy that we do know is good is rookie Jairus Byrd.  Byrd has 7 picks in the 6 games he has started this season.  It will be important for Vince Young to know where Byrd is every time the ball is snapped.

Vince had a pretty nice game the last time these two teams met.  The Titans probably won't need that type of effort out of him this time.  They just need him to keep doing what he has been doing in his first two starts.

The Bills offense has struggled this year.  The addition of Terrell Owens hasn't given them the big play option they hoped it would.  Owens missed a lot of practice this week but has declared himself ready to play.  I can't wait to watch Cortland Finnegan shut him down and mess with his head in this game.

The Bills have the potential of being a big play offense with Owens and Lee Evans, but that has really come to fruition for them thus far this season.  Hopefully the Titans have put their big play woes behind them, and they can keep Buffalo from realizing their big play dreams.

The Bills rushing game has struggled this year which is surprising because they have two pretty talented running backs in Marshawn Lynch and Fred Jackson.  Look for them to try some reverse stuff with T.O. and Evans to help supplement the run game.

This is a game the Titans should win if they do the little things right like taking care of the ball and not giving up big plays.  Should be a fun day to sit back and watch CJ amaze us yet again.