Buffalo Bills at Tennessee Titans Series at a Glance

Share All sharing options for: Buffalo Bills at Tennessee Titans Series at a Glance

The Titans lead the all-time series between these two franchises 25-16.  The Titans are 13-6 at home against the Bills and have won the last two meetings.  These two franchises have also played two of the more memorable postseason games in NFL history.  Luckily for me I wasn't and Oiler fan when the Bills had the amazing comeback so my postseason memories are nothing but pleasant against the Bills.  (And yes, it was absolutely a lateral before that debate starts here.)

Buffalo Rumblings has a breakdown of the last 5 regular season meetings here.

We will once again be treated to Ian Eagle and Rich Gannon on the CBS Broadcast. 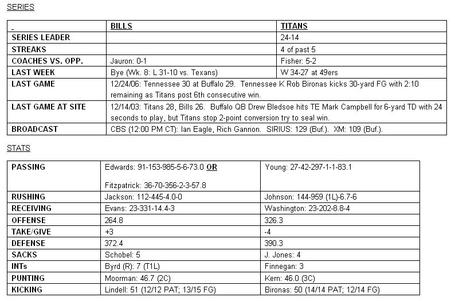 Here are the notes on the game sent out by the NFL office: