Share All sharing options for: Tennessee Titans Morning Links: Thank You To Our Real Veterans Edition 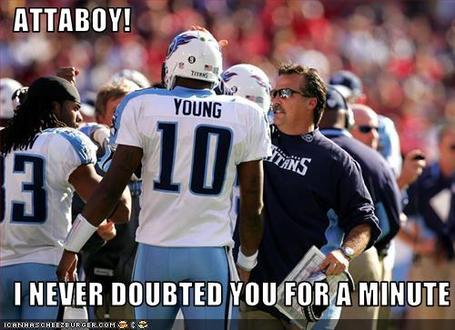 What better way to start off the Veteran's Day links than with a story about the Titans' own veteran of military service, Ahmard Hall.  Hall served in the Marines in Kosovo and Afghanistan before walking on to the Texas Longhorns team upon his return.  We can't thank Ahmard Hall and every other veteran for the US Military enough for their bravery and sacrifice for this nation, so perhaps the best we can do is never forget that they're the backbone of everything good in our lives.  Without our veterans we wouldn't have the freedoms we enjoy today.

Jim Trotter of SI.com makes his prediction for the second half of the season, and he's predicting a continued marriage between Vince Young and the Titans after the season ends:

3. Vince Young will be the Titans' QB beyond this season.

... Young looks as if he has been humbled and hardened after being relegated to the sidelines the final 15 games last season and the first six games this year. He always has had a way of rallying teammates, and he'll do it again by leading the Titans to four to six wins in their final eight games (which means six to eight wins in his 10 starts).

If you missed the debacle excitement last night , head on over here to check-out a preview of the upcoming game by Jimmy, Buffalo Rumblings and myself.

Follow us through the jump to learn more about the history of Kearse's knee problem...

In a sign that doesn't look too good for the injured David Thornton, the Titans added LB Eric Bakhtiari to the practice squad yesterday.  It's not an outright admission that Thornton's hip problems are serious, but it shows they feel the need to increase depth behind him now that McRath is an interim starter.

One of the chief concerns VY needs to focus on heading into this game is rookie stand-out safety Jarius Byrd, who enters the Thunderdome with 7 interceptions already to his name, including a three game multiple-interception streak.  Here, USA Today takes a closer look at his game.

Jevon Kearse's knee problems date back to his days in Philadelphia, and when he re-injured it earlier in the year doctors found that it had never fully healed correctly.  He's hoping to be back in practice as the team prepares for the Buffalo game this week.

Every time you read a great Titans-related story on the web and don't share it with the MCM community through the fanposts, fanshots or by emailing me at mcmaugustwest@gmail.com a Ravens (or Steelers) fan smiles.  Is that what you want?!!!!?!?!