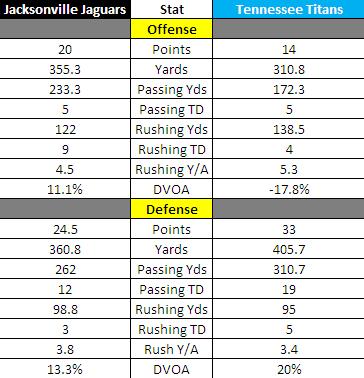 A few observations after the jump.

14 points a game is not good.  Think about this.  We are 30th in the league in total points scored ahead of only the Raiders and Browns.  THE RAIDERS AND BROWNS!!

The Jaguars have five passing touchdowns in six games.  Three of those came against the Titans in week four.  That is 60% for those of you scoring at home.

The discrepancy between the Jags and Titans passing yards given up per game is 44.9 yards.  No one will be surprised to hear that the Titans rank 32nd against the pass.  Jacksonville is 31st.  That's right, the Titans are basically 50 yards worse per game against the pass than anyone else in the NFL.  Amazing!

I am out of words so you can say what needs to be said about the 33 points per game.