Your Choice, Your Vote: Vote Eddie George and Frank Wycheck for the Hall of Fame

Share All sharing options for: Your Choice, Your Vote: Vote Eddie George and Frank Wycheck for the Hall of Fame

MCM and SB Nation are teaming up with JCPenney/Van Heusen and the Pro Football Hall of Fame to promote something new.

This year the Pro Football Hall of Fame is doing something they've never done before. They are giving the fan a voice. Although the Hall's official board of selectors will have the final say, our votes will be heard with the results being announced live on the NFL Network.

To vote, go to fanschoice.com. You can vote one time per day.

This is a pretty cool deal, and it is relevant to us because there are a few Titans guys on the list.  Included on the list are Eddie George, Frank Wycheck, Bud Adams and Gary Anderson.

Eddie was the heart and soul of the Titans franchise when they first arrived in Nashville.  He carried the team on his back early on, and who can forget the run he made against the Indianapolis Colts in the playoffs in 1999 that sent the team to the AFC Championship game?  He finished his career with 10,441 yards and 68 TDs.

Wycheck was another guy that really helped the Titans take Nashville by storm.  He will forever be a Nashville hero because of his role in the Music City Miracles, but people tend to forget how good of a tight end he was.  He finished his career with 505 catches for 5,126 yards and 28 TDs.

Bud has been the owner of this franchise for 50 years.  He was obviously a founding member of the AFL, and we as Titans fans owe an eternal debt of gratitude to him for bringing the franchise to Tennessee (maybe not this year).  Plus Texans fans hate him.  That in and of itself should be enough reason to head over and vote for him.

Who could forget Anderson?  He rescued the Titans 2 years straight when Joe Nedney was sidelined with injuries.  He beat the Baltimore Ravens in a playoff game in 2003.  Again, enough of a reason right there to vote for him.  Plus, who can forget this picture? 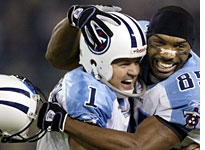 The fan voting is not going to decide whether or not these guys actually get in the Hall of Fame, but this is a good opportunity to show your support for these guys.