Smash broke it down pretty well with his 5 keys to victory.  I have no inside information on this, but I have to think this game is all about attitude for the Titans.  Jeff Fisher says all the time it is more about what the Titans are doing and not what the other team is doing, but this time I really believe that is true.  This is a game that the Titans should win,  but at 0-3 you cannot take anything for granted.

If you have Chris Johnson or LenDale White on your fantasy team play them this week.  The Bedazzlers are about middle of the pack when it comes to run defense (14th 100 yards per game) so no better time to re-commit to smash mouth football.

The Bedazzles are really bad against the pass (32nd 281.7 ypg).  I know it will be tempting for Mike Heimerdinger and company to put the ball in the air 30+ times, but I really hope they fight that urge.  This team is not going to win many games where Kerry Collins throws the ball 30+ times.  No reason to do it unless nothing is working on the ground.

Defensively for the Titans it will be all about shutting down Maurice Jones-Drew.  He is a dynamic player on the ground and catching the ball out of the backfield.  The Titans have done a great job against the run so far this season, and this will be a great test considering MJD is the best back they have faced thus far.

This could also be the biggest challenge the Titans have faced through the air this season, not because this is the best passing offense they have faced, but because they will be playing without Cortland Finnegan.  If Torry Holt wants to convince some people that he isn't washed up, this seems like a really good game to do it.  He will either be matching up against a corner that has never started an NFL game or Nick Harper who is the worst starting corner in the league.  I think McCourty will be fine, but look for them to go after him early and often.

Here is a stat breakdown: 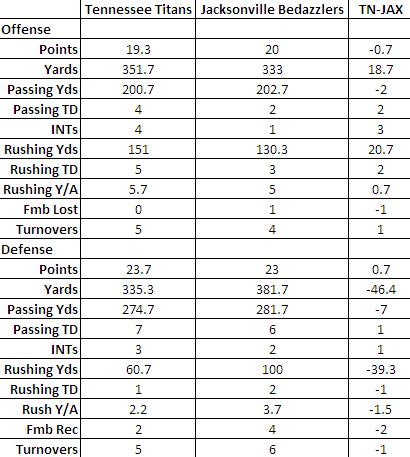 I would like for there to be some more separation between those stats, but it doesn't take looking at that table long to understand why only a game separates the two teams.  We all pretty much agreed before the season that the Bedazzlers were going to be a bad team, and right now the Titans are as well.